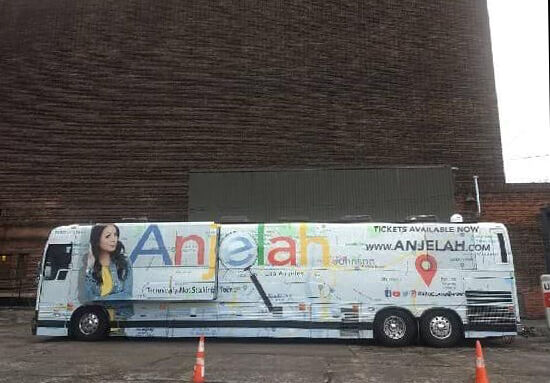 Comedian Anjelah Johnson’s tour bus sits near downtown Cleveland while she does stand-up inside. Johnson was on a two-month stand-up tour across the U.S. in 2019.

Comedian Anjelah Johnson had her first stand-up show in eight months on Oct. 27 in Nashville, Tennessee at Zanies Comedy Club. Johnson made the announcement on Instagram saying, “I’m here in Nashville and I just came to visit, was not planning on doing a show or anything and the last minute I changed my mind … it will be my first time on stage in eight months.”

For the next several days I followed Johnson’s Instagram stories to see how her show went. While sitting backstage, following her performance, Johnson had this to say:

“You guys, I just finished my first show in eight months, and it went well. It was a very special night. If you guys were here at my show, you know why, it was just special. It was symbolic. It was just all kinds of things tonight. I’m grateful for everybody who came out. I’m grateful that we were able to do a live comedy show at half-capacity with social distance seating and you know, people being safe. It was cool to be back and in the comedy world. I’m very grateful.”

It would’ve been special to be an audience member at Johnson’s first show after eight months. When I saw her perform in Cleveland last year, it was a night I won’t get back. She was on a two-month comedy tour, riding in a tour bus, across the U.S. She performed stand-up almost every night in a different city. When she came to Cleveland, it felt exactly what it would feel like when someone has been traveling for a month into their tour. Let me describe that night to you:

After eating tacos from the best taco restaurant in Cleveland, Barrio Tacos, my friend Rebekah and I drove to a large brick warehouse on the outskirts of downtown Cleveland. It was dark and secluded. An ironic setting for a comedy show. But when we turned into the parking lot, we spotted what we were looking for. Well, what I was looking for.

It was huge. The white tractor-trailer size tour bus stretched Johnson’s face across the side. I recognized it right away because she shared it all over her Instagram stories. We took multiple selfies in front of her picture, as did other audience members, and then headed for the door.

The lights turned dim and she walked out on stage. Clapping and loud hollering filled the room.

She began entertaining us. But it didn’t feel entertaining at first. She seemed hesitant, tired and just as I mentioned before, like someone who has been travelling for a month on the road, doing the same jokes night after night.

Her first joke started out slow. But after a few minutes, her energy level changed, and roaring laughter came from the audience. Johnson did not disappoint.

During her time on stage, she pulled out a variety of jokes to engage her audience. I vividly remember Johnson lying flat on her back while screaming and telling us a joke about what it’s like to have a period. I never saw someone laugh so hard until I heard noise coming from the man in the front row. Easy, buddy. The joke is funny, but her description is factual.

Johnson ended the night with two special treats: her famous nail salon joke and Bon Qui Qui songs. Johnson’s career began when she performed on MADtv as Bon Qui Qui, a fictional character. Bon Qui Qui worked at King Burger, was a terrible cashier and rapped her orders through the microphone.

When she posted on Instagram the summer of 2019 that she would be going on a two-month comedy tour, I was already planning my attendance. I asked my friend if she wanted to go with me, she said yes and I bought the tickets.

I waited a few months, as the tickets sat on my kitchen counter, for Johnson’s show. Anyone living in 2019 would have never predicted what 2020 would be like.

Her bus tour was a success. Only half of the tickets were purchased for the Cleveland show, but many of the other cities were sold out. Johnson’s tour ended before Christmas of 2019 and her last performance was February 2020 in her home state of California before the pandemic took over our country.

But she returned for one night on Oct. 27 in Nashville, Tennessee into the comedy world for a sold-out show.