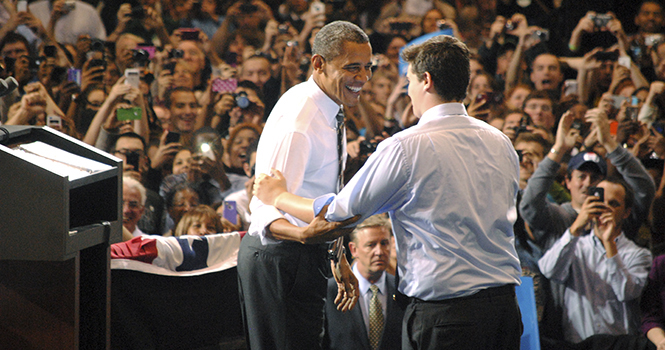 Jake Green was elected president of the KSU College Democrats Thursday night after longtime president Bryan Staul stepped down to take other opportunities.

Staul, who has served as the Dems leader since April 2011, said the primary reason for his leaving was the fact that he’ll be moving to Washington D.C. next semester for an internship and won’t be able to fulfill his responsibilities as president any longer.

He said though his terms as president have been time consuming — from registering over 3,000 voters to hosting a visit from President Obama earlier this semester — he has absolutely no regrets.

Green, sophomore public relations major, said the College Democrats was the first organization he joined on campus. He has previously served as communication director and said he is excited to remain an outspoken student leader on campus.

“We’re trying to modernize our image,” he said. “We don’t want to be seen as an ‘up-and-coming’ party, but as the party that understands current issues, what students need and what the people of Kent are looking for.”

Green said the organization currently relies heavily on Facebook and other social media to encourage student participation, but, under his leadership, it will step up its ground game. He also intends to focus much of his time recruiting new members. Membership, he said, is not at its finest.

“A lot of it has to do with the way we brand our organization and the way we reach out to people,” he said.

Finally, Green believes his strong communication skills will be an asset to the College Democrats.

“As a public relations major, my abilities to deal with the press, write press releases and market the organization are going to be my biggest asset,” he said. “We’ve seen a huge growth in the way we’ve been noticed on campus since I took over as communications director.”

Staul said one piece of advice he’d give to Green, as the new leader of one of the most active student organizations on campus, is to think of his work as a public service.

“Remember that, even though heading this organization can be the toughest student leadership position on campus, that you are doing an incredible service for the people that attend KSU,” he said. “It’s not about the campus or the administration. It’s about the students that make this place possible.”