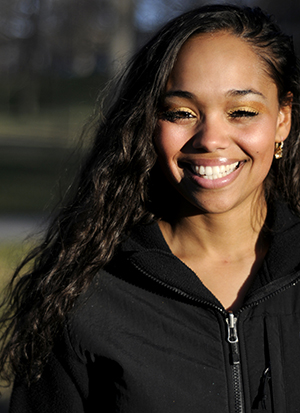 Katie Fickle, a senior public relations major, has a white mother and an African American father. Photo by Hannah Potes.

Ja’Nitta Marbury first became curious about her biracial great-grandparents when she was learning fractions in school.

“They were both halves, but they made a whole of nothing,” said Marbury, a counselor in Cleveland.

Marbury, a 2006 Kent State doctoral graduate, researched biracial students for her final dissertation even though she has two African-American parents. She found that a biracial individual’s physical appearance didn’t necessarily match their inner comfort zone.

“In a lot of instances, people just assume that they’re black, and they’re not,” Marbury said. “For some people they’re OK with that as a way to make things easier. Whereas for other people, it’s a problem because they feel like they are denying a part of their heritage.”

Amoaba Gooden, interim director of the department of Pan-African Studies, said due to the impact of slavery and colonization, race is associated with the implication of being only black or only white.

“Everyone wants to place you in a specific category,” Gooden said. “I think it’s up to the individual regardless of your ethnic background to disrupt that notion.”

Gooden said biracial individuals face the challenges of choosing one “nation” over the other, while they should be able to self-identify.

“This whole idea of naming ourselves and claiming who we are is equally as important as how people name us,” she said. “You can’t affix your identity based on a census box.”

Beyond black and white

“I associated myself as a black person,” Star said. “As I got older, I knew I wasn’t just black or just white. And over time, being here [at KSU] and getting involved in both cultures rather intensively, I’ve come to the conclusion that I am biracial.”

Star, who said he identifies with both black and white people, has a white mother of English descent and a black and Cherokee Indian father.

“She listens to classic rock and my dad listens to Tupac,” Star said. “I grew up in an incredibly diverse household.”

Star said during his elementary years, other African-American kids at school called him white because he had the lightest skin color out of his group of friends. His mother told him that by society’s standards, he was considered a black male, which he identified as throughout middle and high school.

“I was the only kid I knew that was mixed until I got here,” Star said about his experiences before Kent State. “I never really met too many mixed kids.”

Star said being biracial, he has learned not to classify people by race.

“Being biracial, I don’t believe I can be categorized by race,” He said. “Since I don’t associate myself with race, I tend to not associate others with race either.”

When Myla Gordo goes out to dinner with her family, she sometimes sits with three races at one table: white, Filipino and African-American.

“It’s very much like, ‘are you guys on one check, you’re separate right?’ ” said Gordo, a sophomore fashion merchandising major. “I’ve been asked if I was adopted. They ask us that all the time. They don’t think that we are all one family.”

Gordo was born to a white mother and Filipino father, but both of her parents are remarried to African-American spouses. Gordo identifies with all of her family’s races, but said people ask her about her race all the time.

“They’re like, which box do you check?” Gordo said laughing. “I usually either check white or Asian or white or pacific islander or other. Other has always been my scapegoat if I don’t want to go through all the motions, which is kind of stupid because it’s like you should make your civilians feel more like a person than an ‘other.’ ”

Gordo said her race was never questioned until her mother moved her and her sister to New Richmond, a small town in Southwest Ohio that is “literally 90 percent white” according to Gordo.

During middle school, she said kids bullied her calling her a “dirty Mexican.”

“You were either considered white, black or Mexican,” Gordo explained. “My [African-American and Filipino] sisters don’t live in New Richmond anymore, but as I got older, it was a lot easier for me to be accepted … so I stayed in New Richmond.”

She said doesn’t identify much with her mother’s white side of the family, but feels “more at home” with her immediate Filipino side of the family and her embracing, close-knit African-American family. She, therefore, considers herself “tri-racial.”

“Because my stepdad’s black, and I spend a lot of time with my black family, I identify really well with black people too,” Gordo said. “It depends on the day and who I’m hanging out with.”

Gordo said she doesn’t let cultural differences between the races affect her family dynamic. She considers it a “blessing” to be multiracial.

“I feel like it has made my perspective on life more open,” she said. “I’ve noticed I’ve been more open to things with other people’s cultures versus some of my other friends who are one race.”

‘The best of both worlds’

“I don’t identify as white or black. I’m not like I’m only white or I’m only black. I identify as I’m black and I’m white,” she said.

Fickle, whose mother is white and father is black, has one biracial brother and one white brother. She said her extended family has not always been accepting of “mixing.” At first, she said, her grandmother didn’t know what to think of it.

“She wasn’t really sure about it because my mom was the first person in our family to bring an African-American into our family,” Fickle said. “I was the first black person on the white side of my family. But now it’s crazy because it’s like that’s not an issue at all.”

Fickle said growing up in East Liverpool, Ohio, she didn’t really think about her race.

“I think when you grow up and you’re born biracial, you live your life as a biracial individual,” she said. “That’s what you are, and you don’t think about it because those are the norms you have grown up with your entire life.”

Although she claimed to never have a problem with her identity, other people have.

Fickle said she disapproves of identifying someone by his or her pigment.

‘I was raised in a white family’

Jayson Kolbicz, junior theatre studies major, said although he is biracial, he feels more comfortable in an environment with white people.

“My mom is white, and my dad — who I’ve never met — is black,” he said. “I have a stepdad who’s married to my mom, and he’s white. My adopted father is also white. I was raised in a white family.”

Like Fickle, Kolbicz said he never had a problem growing up as a biracial individual.

He said he has a few mixed friends and a few black friends, but it is harder from him to relate to them.

“I’ve kind of assimilated myself with people who are mostly white,” he said. “It’s harder for me to relate the culture of black people in society and stuff because it’s so much different than what I was raised with.”

Despite his associating more with white people, Kolbicz said when he fills out forms, he checks the box that says “mixed” or “other.”

Kolbicz, who appeared in Kent State’s production of “The Rocky Horror Show” this semester, said he might run into a problem with his race when he begins to audition for productions in New York City after he graduates.

“In acting, it’s all about how you look, and I’m not white for the white roles but not black for the black role,” Kolbicz said. “So it’s going to be figuring out which things I can go for just based on color. That’s the only thing I’m foreseeing being a problem.”