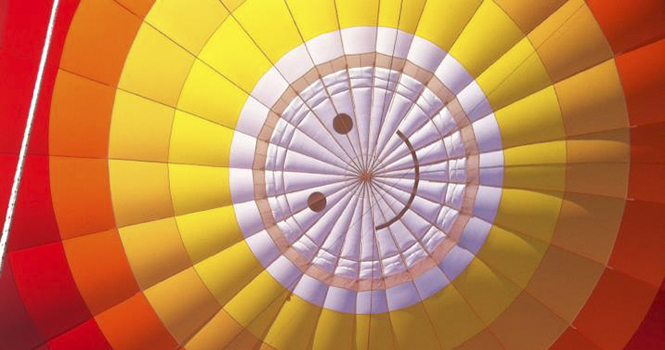 It began with two words from Doug Davis: Brace yourself.

“You’ll want to bend your knees like you’re jumping off a step or two,” added Davis, a pilot for America’s Unknown Destinations, a hot air balloon company based in Kent. But for one local couple, a much bigger leap of faith was in store.

Two weeks prior to the jump, Jonathan Martin contacted the Davis family for the sort of proposal that could quite literally take his girlfriend’s breath away. Launching from a patch of green near Brimfield Plaza, the couple — Davis and his girlfriend, recent Kent graduate Loren Marshall-Flynn — began their hot air balloon flight near sunset. Martin could only wait for the moment when crew members would unfurl the banner down below: “Loren, Will you Marry Me?”

“She’s going to go nuts,” said Chet Davis, owner of the company. “They all do.”

For Davis, flight is a weekly activity. Providing two to three rides a week, he has also hosted about five marriage proposals per year for the past 27 years.

For those three decades, the eyes of Kent State students have been drawn to the sky as hot air balloons occasionally float near campus when the skies are clear. Launched from a green space near Brimfield Plaza no bigger than the average backyard, the balloons have become a staple of the Kent skyline.

Davis said that few Kent State students have the means to purchase a flight, which costs $250 a person for the standard ride. However, he laughed off the observation with a smile and continues to offer two to three flights per week.

As the crew prepared the balloon and sent flames roaring into its billowing fabric, Davis seemed well beyond those old terrors. Chatting comfortably, it became clear that the couple was eager to be launched.

“I’ve been wanting to do this since I was sixteen,” Marshall-Flynn said, unaware of Martin’s plans but restless with either excitement or hidden nerves.

It seemed they had come to the right place. In fact, the Davis crew has their names in the daredevil’s bible.

According to the company’s webpage, the 1999 Guinness World Record book held the Davis name after crew members helped balloon expert Mike Howard perform the “Balloon Skywalk” stunt at over 19,000 feet.

“I didn’t have grey hair until I pulled a stunt like that,” Davis said.

The current online edition of the world record book has Mike’s new record at more than 21,000 feet, set in 2004. Nevertheless, the men provide an evening of whimsy and awe to customers such as Martin. In return, the city has given them something equally valuable: a landing strip.

What goes up must come down.

This logic often kicks in just as the balloon drifts over campus, and crew member Dawn Davis said it is not unusual for the crew to utilize the wide open spaces of Kent State turf, much to the amusement of Kent State faculty and students.

“I really love it when they land on campus,” said sophomore chemistry major Kayla Ivey. Similarly amused, Davis laughingly remembered a time when the crew was forced to land near the Ice Arena, drawing a crowd of onlookers.

Few of these customary spectators were in sight on that October day, however, as the couple launched at 5:33 p.m. They flew over Dix Stadium as Davis followed them in his Jeep, leading family members on what he calls the “chase” while barking “Get that sign out!” repeatedly over his radio.

After several missed opportunities for the big reveal flew by with the changing breeze, Davis was tense but still capable of awe.

“It looks like somebody dumped paint cans on the Earth,” Davis said.

Passing on the gift of an incredible view, Davis once hoped to give to Kent State in some way. He explained that he had formerly thought of working with the art department to allow a Kent student to design a balloon, but the plans had failed to come together.

Since then, Davis has been occupied “in the business of selling memories,” according to his website. He has moved from knee-knocking fear of heights to a perfect record of breathtaking proposals, despite the many variables of the wind-driven industry.

At around 6:30 p.m., Davis was able to add another happy pair to his tally as the material of the deflated balloon rippled to the ground.

With the leap of faith taken and a champagne toast performed by the newly engaged couple, Matt Croyle, an onlooker and freshman math major, spoke to the mood of the evening.

“A day doesn’t get any better than that,” Croyle said.