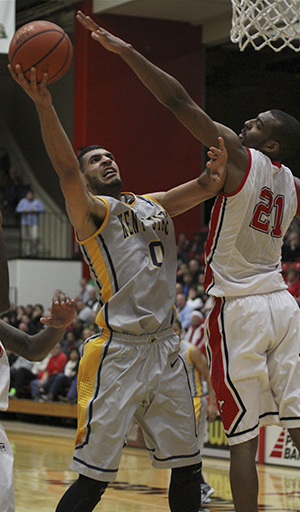 Kent State's Bryson Pope puts up a layup while being defended by Youngstown State's Damian Eargle during the second half of Wednesday nights matchup against Youngstown State in the Beeghly Center on the campus of Youngstown State University. Pope finished the game with three points and six rebounds in the Golden Flashe's 85-78 overtime victory in Youngstown. Photo by Dustin Livesay

But it didn’t matter because the Kent State senior used an ensuing overtime period to make a 25-foot 3-pointer with a defender in his face to give the Flashes a lead they would never relinquish.

“I just wanted to make a great play for my team, whether it was scoring or passing or anything,” Holt said. “I felt like he gave me a little space, and I kind of felt like I had it going a little bit from behind the arc tonight. I just raised up and shot it with confidence and hoped it went in.”

Kent State (5-2) recorded its second road victory in as many games with an 85-78 overtime win over Youngstown State (3-4) Wednesday night in front of 3,108 at the Beeghly Center in Youngstown.

“Every road win is huge,” Flashes head coach Rob Senderoff said. “It’s not easy to get them. Youngstown, I think at the end of the year you’re going to see them with 17, 18 wins. They’re very good. For us to come on the road and beat them here, that’s a great win for us.”

Youngstown State’s Kendrick Perry scored 26 points and led a trio of Penguins scorers that finished in double-figures. But it was Kent State’s inexperienced group that came away with another close victory in its third overtime contest of the young 2012-13 season.

“[Kent State is] showing a lot of toughness, a lot of character, finding ways to win, making winning plays,” Senderoff said. “We’ve now won two in a row on the road, which is not easy to do at all.”

Senior Chris Evans led the Flashes with 24 points and 10 rebounds, finishing with his second double-double of the season. Holt finished with 21 points and five rebounds for Kent State, which completed its two-game road trip with an unblemished 2-0 mark.

“We knew coming into the game that it was going to be a tough game,” Holt said. “Youngstown State is a great offensive team … we knew it wasn’t going to be easy, but we just had to value every possession and just play it like it was the last possession of the game.”

After his game-winner against Bethune-Cookman last week, it was nearly guaranteed that Holt would take the game’s final shot.

Basketball Stats History for Holt: Senior Randal Holt became the 29th player in school history to score 1,000 career points. Holt currently is tied for 25th all-time with 1,015 points. The victory was Kent State’s third overtime game of the 2012-2013 season. The Flashes are 2-1 in overtime games. Kent State had a combined 33-16 advantage in points off turnovers and second-chance points. Kent State is 5-0 this season when Chris Evans leads the team in rebounding. Freshman guard Kellon Thomas has seven assists and zero turnovers in the last three games as a starter, in which he averaged 29.7 minutes per game.

Holt’s attempt bounced off the right side of the rim and to the floor, and the two teams headed to overtime.

Youngstown State opened the overtime period with a layup by senior forward Damian Eargle, who finished with 18 points and 10 rebounds for the host Penguins. But with the Flashes leading 75-74, it was Eargle’s two missed free throws with 2:45 remaining in overtime that proved to be the difference.

Kent State’s Darren Goodson made a jump shot on the following possession to extend the Flashes’ lead to 78-74, and after a turnover on the part of each team, Youngstown was forced to foul.

Holt and Evans each made a pair of free throws to extend Kent State’s lead to 82-76, putting the game out of reach for Youngstown State and securing another hard-earned road victory for the Flashes.

“The seniors are stepping up and they’re leading us,” Senderoff said. “[Evans and Holt] have been really consistent and then we find a way to have somebody else contribute.”

Junior forward Melvin Tabb filled the “somebody else” role on Wednesday night, using his 6-foot-9, 250-pound frame to score a career-high 15 points and grab seven rebounds for the Flashes.

“Melvin was huge,” Senderoff said. “Great on the offensive glass, [he] finished, made his free throws. Defensively, he’s still a train wreck, but he’s getting better, and we’re working and he’s working harder and took a charge tonight. He’s continuing to progress.”

Freshman forward Chris Ortiz appeared to injure his ankle midway through the first half and needed helped off the court. He did not return to the game in the second half and will get treatment and X-rays Thursday.