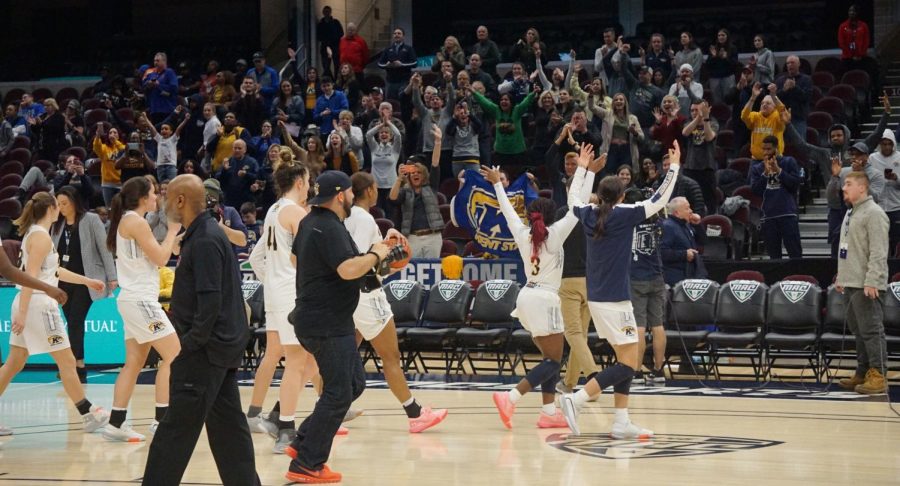 The Kent State women’s basketball team celebrates with the Kent State fans after winning 72-66 against Buffalo in a quarterfinal game at the Rocket Mortgage Field House in Cleveland on Wednesday, March 11, 2020.

The Kent State women’s basketball team began official practices on Oct. 14 for the first time since its season was cut short following a victory over Buffalo in the Mid-American Conference tournament.

“It was super motivating because at the end of last season we felt really good with where we were at,” junior forward Lindsey Thall said. “So coming into this year and getting to finally start official practices was really exciting.”

The team must follow COVID-19 protocols that include wearing masks when they aren’t doing any cardio activities and following other university guidelines.

“We’re starting to get tested more frequently,” coach Todd Starkey said. “We’re up to once a week which will soon turn into three times a week.”

Practices have started well and been competitive, according to Starkey.

Sophomore guard Katie Shumate is continuing to rehab from an offseason knee surgery.

Shumate started in all but two games last season and averaged 12.3 points and 6.4 rebounds per game.

“She’s progressing nicely and we’re still looking at the possibility of her playing this season depending on how she continues to progress,” Starkey said.

Thall, who led the MAC with 2.1 blocks per game last season, is looking forward to getting to play after almost nine months without game action.

“We’ve all been off for so long, so just getting to get some games under our belt is going to be a lot of fun,” Thall said. “We have a kind of a new crowd this year with a lot of different players in different positions, so it’s going to be a completely different team.”

Last season, the team finished with an overall record of 19-11, going 11-7 in conference play. Kent State’s final game was a 72-66 win over Buffalo in the second round of the MAC tournament in Cleveland, Ohio.

The Flashes would have played Eastern Michigan in the tournament semifinals later that week, but the rest of the tournament was cancelled because of the initial spread of COVID-19.

Santoro made the All-Ohio first team her sophomore through senior year and Jackson brings height and rebounding skills to the team.

Kent State also netted junior center Bexley Wallace as a transfer from Penn State, but she will have to sit out this season because of NCAA transfer rules.

Fellow transfer and redshirt junior Linsey Marchese, however, is eligible to play this season after sitting out for Kent State last year.

“Both of our freshmen are doing some really nice things early on,” Starkey said.

COVID-19 has changed the way the team operates this preseason, but Starkey says the goal remains unchanged.

“It’s the same as every season: to win a MAC championship,” Starkey said. “All good things happen in the pursuit of championships and that’s what we’re focused on.”

Kent State is set to open up conference play at the University of Toledo Wednesday, Dec. 30. The team’s non-conference schedule is yet to be released.

Kathryn Rajnicek is a sports reporter. Contact her at at [email protected]