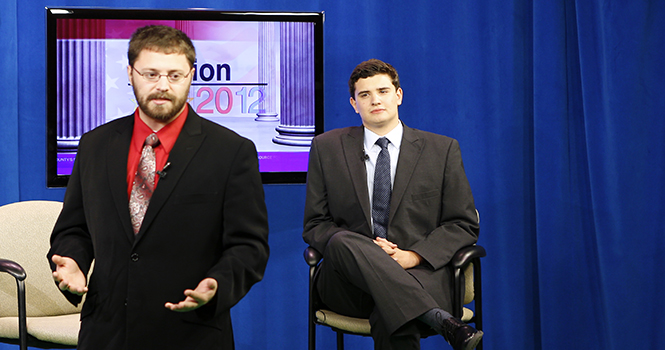 The presidents of the Kent State College Republicans and Democrats squared off in a live, hour-long debate Wednesday night in which each participant made the case for his respective party.

The discussion, hosted by TV2 and moderated by “Portage Pulse” anchor Jasen Sokol, featured a series of issues pertinent to college students and residents of the Kent community, while localizing many hot-button issues circulating the 2012 presidential race.

During his opening statement, Stephen Dawson, president of the College Republicans, took the opportunity to thank his opponent, Democrat Bryan Staul, for participating in the event, while emphasizing that the two on-screen adversaries were actually quite fond of each other regardless of their political affiliations.

Dawson said he believes this election is one of the most important in recent history because of the considerable impact it will have on America and outlined the ways in which the country prospers — including smaller government and personal freedoms.

Staul said voters in this election are faced with a choice between two very conflicting choices: Basic fairness or “you’re on your own.”

“Gov. [Mitt] Romney’s not the future, folks. Gov. Romney is the past,” Staul said.

“One whole year spent on Obamacare and no time spent creating jobs, no time balancing the budget,” he said.

Dawson said he believes the role of government is to care for the needy and unfortunate and not to “dictate what you drink in New York City,” citing the new ban on large soft drinks in the nation’s largest city.

Staul said Democrats have a monopoly on caring for the needy that can be illustrated through years of legislation that does just that.

On the issue of abortion, Staul pointed to recent comments made by Republican politicians, specifically citing the “legitimate rape” comment from U.S. Senate candidate Todd Akin of Missouri.

Dawson didn’t attempt to defend these statements and pointed out that the Republican Party disavowed Akin’s comments.

“Abortion is a very personal issue; I’m personally pro-life,” Dawson said. “I personally believe every life is important. The comments [Akin] made were wrong and inappropriate, and he should never have made them.”

Staul said he shares former President Bill Clinton’s views on abortions: that they should be safe, legal and rare.

“We should make it easier to raise a child in this country, not harder,” he said. ”That’s a pro-life policy.“

Ohio’s Issue 2, which will be on the Nov. 6 ballot, seeks to shift geographical redistricting power from state legislators to a commission made up of 12 Ohio residents.

Though both Dawson and Staul agreed that changes need to be made to the current system of redistricting in order to prevent gerrymandering, Dawson said Issue 2 is not the way. He accused Democrats of putting forth the issue after losing power as state legislators.

“It’s funny how Issue 2 comes up now, but they didn’t do it when Democrats held the majority of state legislators,” he said.

Staul then emphasized the positive role that government can have in our lives.

“Government can negotiate trade deals … close tax loopholes and create opportunity for jobs,” he said. “Government created the Internet and the space program.”

After the debate, Dawson offered his analysis of the debate.

“It was a nice discussion between two people who have the same goals, as Bryan and I do, for the country, but different ways to get there,” he said. “A little heated at times but, you know, that’s how politics get.”

Staul said he enjoyed the atmosphere of the event and appreciated the constructive discussions of the evening.

“It was great to have the College Dems and Republicans in the same room,” he said. “We don’t get to do a lot of it.”

As the Nov. 6 Election Day inches nearer and nearer, both Dawson and Staul strongly encouraged students to participate in the upcoming election and have their voices heard.