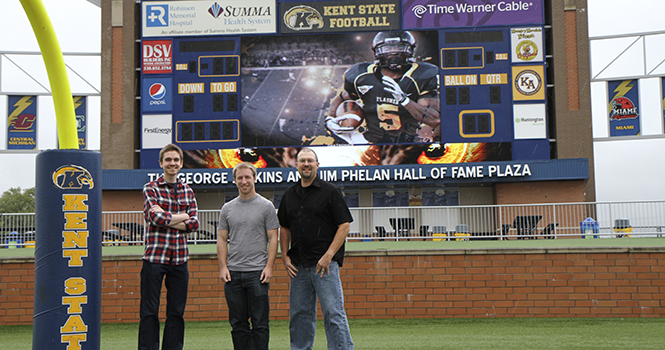 The Flashes football program was included among the nation’s best in a recent post by ESPN.com Playbook writer Patrick Dorsey. In the article, Dorsey posted three introduction videos that impressed him, and Kent State’s was among the three.

The video, produced by Kent State’s Teleproductions department, features multiple Kent State football players and a virtual model of Dix Stadium, and is played just before the Flashes take the field at home. The graphic presentation of the video stood out to Dorsey.

“I didn’t find a huge amount of intro videos that early in the year, but Kent State’s was up, and it was certainly on par with the other two [Florida State and West Virginia],” Dorsey said in an email. “The contrast between still photos and video, color and black & white — it’s interesting, and something I myself haven’t come across much in watching these 2012 videos.”

The video opens with the virtual model of the stadium, and combines still photos of seniors and star players on the KSU football team with black-and-white highlights. A group led by graphic designer Jim Hurguy, along with graphic assistants Brian Recktenwald and Alex Kurr, produced it. Recktenwald, a senior managerial marketing major at Kent State, has been involved with Teleproductions since the 2010 spring semester.

Although the video doesn’t last more than one minute, the staff’s effort to create it wasn’t a one-night affair.

“On and off we had been working since June, but total, I’d say around two months,” Recktenwald said. “[To create] the beginning sequence we had actually gone out to the football stadium. We did a panorama from 50-yard line of stadium and took pictures of the tunnel.”

The production crew ran into some issues along the way — especially with the virtual stadium graphic.

“Setting [the virtual stadium] up in 3D was the biggest headache in the world. It took me two weeks just to get that right,” Recktenwald said. “It was probably a week and a half we spent cutting out player photos.”

Following the completion of the video, Recktenwald consulted his brother, a former member of the Teleproductions staff, for his opinion.

“[I was] extremely relieved, I went right away and posted it on Facebook and online,” Recktenwald said. “I called my brother and had him look at it, he really liked it. He was impressed, which made me feel good.”

Although Recktenwald’s brother approved the video, he never expected his work to reach national prominence.

“I knew it was better than the previous volleyball and gymnastics ones, but I didn’t expect ESPN to pick it up,” he said.

Emails and text messages spread throughout the athletic department and Teleproductions crew when the ESPN blog post was discovered.

“I was kind of in disbelief. I was actually on the phone with my girlfriend,” Recktenwald said. “I got on my YouTube account and wondered ‘how did I just get 2,000 views?’

“[Recktenwald] was funny because his subject title in his text was ‘best day ever,’” Hurguy said. “He was totally pumped.”

Recktenwald’s favorite part of the video is the end, in which the opponent’s logo explodes and is replaced with Kent State’s golden flash.

“There really wasn’t any ‘a ha’ moment,” Recktenwald said. “Over the course of the summer, we had acquired a couple of new plug-ins just so I could create effects. I knew I wanted to do some sort of particle explosion destroying the opponent. Then I said ‘why don’t we have the particle come on the field at the beginning.’

Recktenwald is no stranger to national recognition. He won a silver Telly Award for the Flashes volleyball introduction video in 2011, and a Gold Communicator Award for the entrance video for gymnastics for the 2011-12 season.

“I think [the football video is] probably one of his best,” Hurguy said. “…I’d say the last several entrance videos, and really all the stuff that he’s been working on has really gotten much better since he’s been here.”

Kurr, a senior visual communications design major, has been close friends with Recktenwald since elementary school and was influenced to join the staff. He started his time at Teleproductions in the summer.

His work expands beyond Kent State athletics as well. Hurguy painted multiple 10-foot-tall guitar sculptures for Cleveland’s Guitar Mania public art project, including Cleveland Cavaliers and Cleveland Indians-themed guitars. Hurguy spent countless hours on the projects, and even painted by flashlight when a power outage caused by a thunderstorm struck his neighborhood.

Hurguy acted as a supervisor, watching over and guiding his student designers as they worked on the introduction videos.

“Brian had a lot of input on this video and he did a majority of the work,” Hurguy said. “I was basically the art director and did some pieces and parts for him. Add Alex into the mix and he did his part. He also helped us brainstorm through some different sections.”

Kent State benefitted in part from the accessibility of video in the current age of information. Dorsey came across the compilation while searching YouTube for new introduction videos for the 2012 season.

“I subscribe to some major colleges’ YouTube channels, because they tend to produce the kind of videos we like to post sometimes on Playbook,” Dorsey said. “And when WVU and FSU released theirs last weekend, I went searching on YouTube to see if other good ones were out there.”

The inclusion alongside major Football Bowl Subdivision programs was encouraging and motivating to the Teleproductions staff, which is constantly working to improve the quality of its productions for Kent State athletics.

“[Florida State and West Virginia] are big football programs,” Hurguy said. “They’re not only successful football programs, they’re huge; they have huge fan support. They’ve got big budgets. They can go out and make these videos for their teams, but we feel that we can stand up right there with them, be as creative, and obviously make a video that’s seen and can grab people’s attention.”

Whether or not the Flashes football team can build on its 3-1 record and compete with bigger universities remains to be seen, but Kurr said Kent State Teleproductions already can be viewed as a professional-level program.

“Like Jim says, those are really big schools with huge programs,” Kurr said. “It’s just pretty cool to be on the same level as them, maybe even above.”