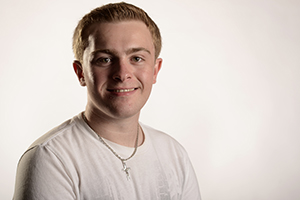 Dan Jenkins is a freshman news major and columnist for the Daily Kent Stater. Contact Dan Jenkins at [email protected]

Taylor Swift has openly admitted to being influenced by many genres outside of her country base.

She has featured artists like Usher, Nicki Minaj, Hayley Williams of Paramore and James Taylor as guests on her Speak Now World Tour, had a hit collaboration with B.o.B and has had numerous hits on the pop charts as well as country. Her new album, “Red”, released last Monday, finds Swift unabashedly embracing those alternative influences.

I became a big Swift fan when her song “Teardrops on My Guitar” got big around February 2007. I am now the go-to person for just about everyone in my life who wants to know what’s going on in her life or if she’s working on a new album. The thing I love the most about her music is that even though she retains the same signature writing style, she grows and changes with each new album she releases, and “Red” is definitely not an exception to this rule.

It does have some ultra-poppy moments — the lead single “We Are Never Ever Getting Back Together” and dubstep-influenced “I Knew You Were Trouble” being prime examples — but overall, “Red” is a much more sophisticated album compared to her previous releases.

After writing her last album, “Speak Now,” entirely on her own, she opted to collaborate with as many people as possible for “Red,” which features producers such as Max Martin, Shellback, Butch Walker and Dan Wilson. Additionally, she has two duets: “Everything Has Changed” with British acoustic singer Ed Sheeran (who will be opening for her on the Red Tour in 2013) and “The Last Time” with Snow Patrol’s lead singer Gary Lightbody.

The interesting thing about these duets is that Swift allows her collaborators’ sound to influence these tracks more than her own. “Everything Has Changed” has a relaxed vibe that is very in line with the songs on Sheeran’s debut album, “+.” For “The Last Time,” Swift and Lightbody collaborated with Snow Patrol’s frequent producer Jacknife Lee to capture the band’s typical sound. Both duets are definite highlights on the album.

The banjo-driven title track is another notable song, as well as the disc’s indie-rock influenced opener, “State of Grace.” My personal favorite is the song “All Too Well.” It’s in typical Swift style, with her feelings plainly spilled out over gentle guitars. These feelings build up momentum into emotionally wrought choruses that recall specific moments of elation in a relationship gone awry (supposedly one with Jake Gyllenhaal). It could easily be compared to “Dear John” on her last album, but it’s not quite as intense as that seven-minute diatribe aimed squarely at John Mayer.

“Red” does have its missteps, though, which is something I can’t say about “Speak Now.” No matter what I do, I can’t get into “Sad Beautiful Tragic,” and “Starlight” feels immature next to some of the more poignant songs on the album.

However, no album is perfect. I am more than pleased with “Red” and think it’s a great indicator of who Swift is and where she is at this stage in her life.