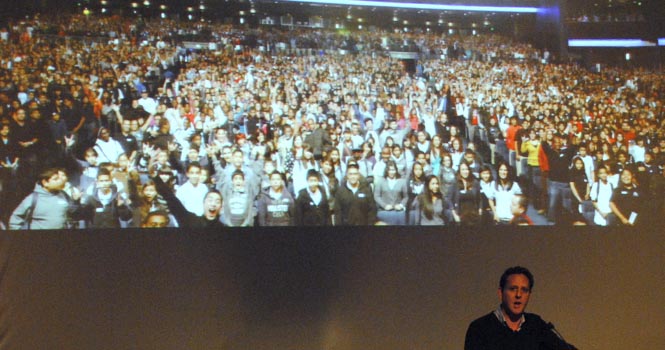 Documentary filmmaker Lee Hirsch speaks at Kent State Stark on Monday, Oct. 8, showing a picture behind him of an audience of 7,000 kids who saw the movie recently . Hirsch spoke about his 2011 film, "Bully", elaborating on the characters' stories, his experience and the inspiration to create the film. Hirsch encouraged the audience's participation with a question and answer at the end. Photo by Jenna Watson

Hirsch explained he was a victim of bullying. A group of boys physically and mentally abused him to the point where he said had trouble getting home. Hirsch held a photo of his family.

“There’s the kid who used to get punched,” Hirsch said.

His father advised his son to fight back. Hirsch explained, for some children, fighting back might be good advice; however, this is not always going to work. Hirsch noted if it doesn’t work, children might feel shame, which in turn leads to a guarded composure in regards to the issue.

Due to his own personal experiences and his interest in activism, Hirsch created the documentary “Bully.”

Practically all of the audience was still standing.

Hirsch instructed people to stand if it they ever bullied someone else or if they have witnessed bullying and done nothing.

“We’re a collective people that have gone through this,” Hirsch said. “Actually, it fundamentally affects everybody.”

Hirsch proceeded to show the audience the first third-portion of “Bully.” The film focuses on a seventh grader at East Middle School in Iowa named Alex. “Bully” exposes Alex’s experiences with bullying and also a school educator’s perspective in dealing with these issues.

The audience responded negatively at one point during the film, owing to the actions of a thoughtless educator, while taking care of severe issues. Hirsch described the audience of having a “sense of injustice” while watching the scene.

“Educators are not equipped to deal with bullying,” said Hirsch.

Although Hirsch described East Middle School in a negative light, he is grateful that the school opened its doors. He described this gesture as being the truest example of a school district embracing or reaching out for change.

In order to spread word, Hirsch showed “Bully” to about 7,000 kids across a large school district. He expected students to be entering the theater with negative thoughts.

“You could hear a pin drop throughout the entire movie,” Hirsch said.

Speaker Lee Hirsch seemed to read everyone’s minds in the Timkin Great Hall, “I bet you all are wondering how Alex is doing.”

Alex is now a straight A student, a public speaker, a role model, and he received the Youth Award from rapper Sean Kingston. Hirsch closed with a clip of Alex rapping on stage alongside Kingston in concert.

Cinemark Movies 10 in North Canton will be showing the documentary until Oct. 11.