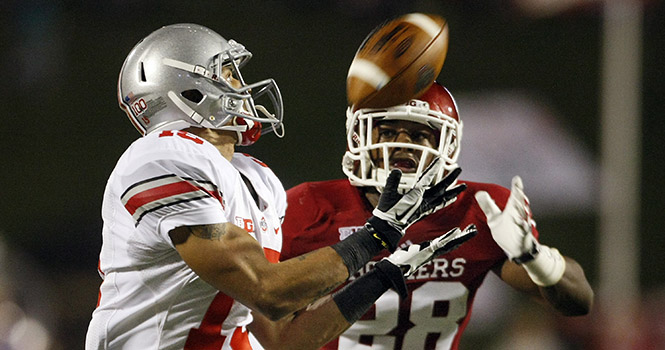 Ohio State and Indiana turned in one of the more exciting games of the season on Saturday as the Buckeyes narrowly escaped Bloomington with a 52-49 victory. This game had blocked punts by both teams, both of which were turned into touchdowns.

The Buckeyes offense was at the top of its game Saturday, as quarterback Braxton Miller was 13 for 24 in passing attempt. Miller threw for 211 yards and two touchdowns. In the run game, he had 23 carries, rushed for 149 yards and one touchdown.

Saturday’s game against Indiana was Miller’s third straight game of passing for more than 120 yards and rushing for more than 130 yards. Ohio State’s defense wasn’t at its best, allowing 49 points, the most they have allowed all season. The Hoosier offense was paced by quarterback Cameron Coffman, who was 22 for 44 in passing attempts and threw for a game-high 275 yards and one touchdown.

Indiana running back Stephen Houston helped the Hoosier offensive attack with 11 carries for 91 yards and two touchdowns. Indiana’s 49 points were the most that they have scored all season.

Having a high-flying offense, like West Virginia’s, is a necessity if you want to win in college football. Unfortunately for the Mountaineers, they found out on Saturday that having a good defense is important, as well.

West Virginia suffered its first loss of the season on Saturday, falling 49-14 to Texas Tech. Mountaineer quarterback Geno Smith didn’t seem to be himself, going 29 for 55 in passing attempts, throwing for 275 yards and one touchdown.

Texas Tech took it to the Mountaineers, leading 35-7 at the end of the first half. Texas Tech quarterback Seth Doege was the star of the game, as he was 32 for 42 in passing attempts, while throwing for 499 passing yards, which was more that the entire West Virginia offense had the entire game, and six touchdowns.

After three straight years of losing to Stanford, Notre Dame finally had enough, getting a hard-fought 20-13 overtime win in South Bend, but this game was not without controversy.

Notre Dame’s defense stopped Stanford running back Stepfan Taylor with a goal-line stand on fourth down in overtime. After the play was over, some noticed that Taylor’s knee never did touch the ground before reaching the ball into the end zone, but the officials had blown the play dead.

After further review of the play, the officials ruled that the call on the field stood and that Notre Dame won and remained undefeated, keeping their national title hopes alive.

Notre Dame linebacker Manti Te’o led the Irish defense with 11 tackles, to add to his season total of 57. With the win, Notre Dame moves to 6-0 on the season and Stanford falls to 4-2 on the season.