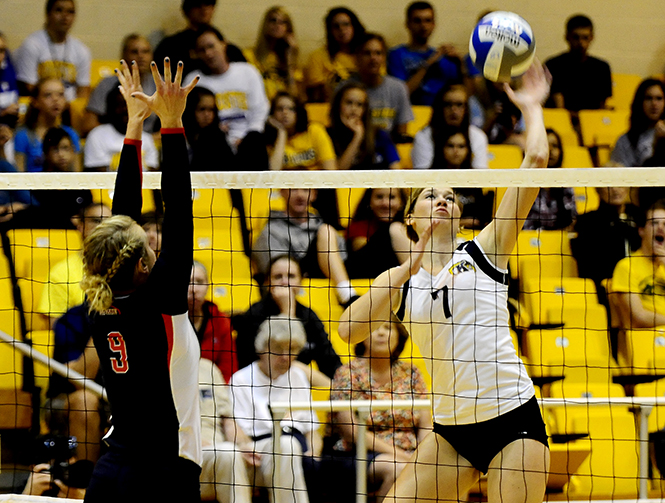 Freshman Kelly Hutchison spikes the ball over the net during Friday's game against Liberty. Photo by HANNAH POTES.

The Kent State Flashes volleyball team will continue Mid-American Conference play this week with two matches against the Buffalo Bulls and the Akron Zips. The Flashes will take on Buffalo at 7 p.m. Friday and wrap up the week against Akron at 7 p.m. Saturday. Both matches will be at the M.A.C. Center.

When asked what the team needs to do to pick up two victories this week, senior captain Kathy Krupa said teamwork will play a key role.

“We really have to play as a team,” Krupa said. “We believe that other teams don’t actually beat us, but they out-team us by working together and flowing together better than us. We’re really trying to focus on every aspect of our game and bringing them all together this weekend.”

The Flashes will go into Friday night’s match against the Bulls with an overall record of 4-12 and a conference record of 1-3. Last week, the Flashes dropped two conference matches to Ohio and Central Michigan, each in three sets. The losses put the Flashes on a three-game losing streak after picking up a win in its first MAC game against Miami.

The Bulls will head into Friday night’s match at the M.A.C. Center with an overall record of 7-9 and a conference record of 1-3. Last week, the Bulls went 1-1 in MAC play with a victory against Miami Friday night, and a loss to Bowling Green Saturday.

The Zips will go into this week’s play with an overall record of 9-7 and a conference record of 2-2. Before Saturday’s match at the M.A.C. Center against Kent State, the Zips will take on Ohio Friday night in Athens, Ohio. Last season, the Zips and the Flashes split two matches against each other, with the home team winning each matchup.

The trophy, which began in 1945, was originally awarded to the winner of the Akron-Kent State football game. This year, the competition will be between 15 teams from different sports, and each win will give their respective school one point in the standings.

To keep the tradition, the winner of the Akron-Kent football game will still maintain the Wagon Wheel itself, but the school that has the most points at the end of the year will receive an overall series trophy.

Drew Jones is the volleyball reporter for the Daily Kent Stater.