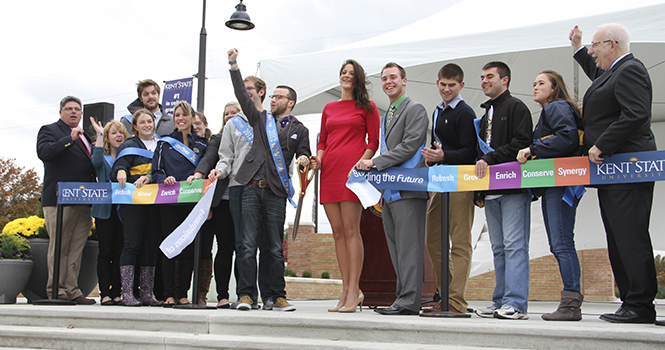 Evan Gildenblatt, executive director of Kent State’s Undergraduate Student Government, cheers toward the crowd after cutting the ribbon during the dedication ceremony for the new Student Green in front of Risman Plaza Thursday. Construction began on the site in early April and concluded in October. The area provides more space for students to relax as well as a performance stage for student organizations. Photo by SHANE FLANIGAN.

The ceremony, which was free and open to the public, included a booth for guests to enjoy hot dogs and refreshments. Undergraduate Student Government hosted a raffle to win an Xbox 360 or Nintendo Wii. The Homecoming Court attended the ribbon cutting as special guests.

“I’m ecstatic to be a part of the revealing of this incredible new addition to our campus,” Holton said.

“It’s an additional outdoor space for students to gather when the weather is nice and enjoy programs presented by Kent Interhall Council or USG,” Sokolich said.

USG’s executive director, Evan Gildenblatt, said the Student Green is a representation of what Kent State has become.

“It’s a space that really amplifies the beautiful atmosphere that’s been built up here over the past hundred years or so,” Gildenblatt said. “It’s fitting that we’re unveiling this space today officially in the run up to homecoming.

“The Student Green is so much more than just a magnificent centerpiece for our campus. It’s a sign that the future is filled with new and exciting things for Kent State.”

“This is a historical and landmark day at Kent State,” Lefton said. “For me this day represents a promise kept. Shortly after, my arrival I told the students that I would work to give them the green space in a concrete-covered heart of campus. Seeing an architectural rendering come to life is always a matter of pride.”

Lefton spoke briefly about future projects around the university.

“The next thing you’re going to see is the Esplanade,” which is being extended to join with downtown, he said.

Because of strong winds, the ribbon accidentally broke during Lefton’s speech and was quickly taped back together.

Each member of the homecoming court was given a piece of the ribbon to keep.