‘The Newsroom’ actress takes Kent State students to the polls 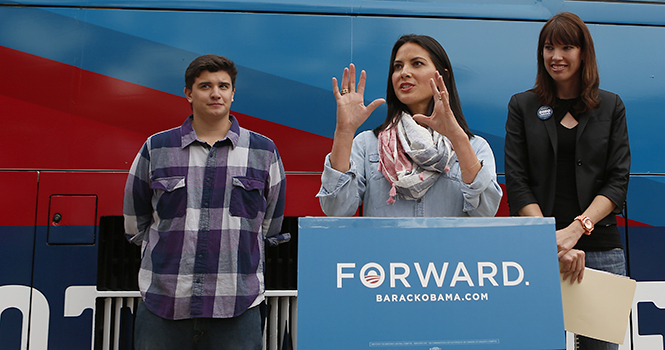 Olivia Munn speaks to students about the importance of voting, outside of Eastway on Friday. Munn is an actress, comedian, model, televison personality and author. Photo by Coty Giannelli.

Actress Olivia Munn and the Democratic National Committee shuttled students from Eastway Complex to the Board of Elections in Ravenna for early voting Friday during another effort to promote youth involvement in politics.

The bus allowed first-time voters to make their experience a memorable one and provided transportation for students who have none.

Munn, who stars in HBO’s “The Newsroom,” stepped out of the tour bus labeled “Forward” and spoke briefly with a few dozen students they should exercise their right to vote in the Nov. 6 election. Because Ohio could determine the outcome of the upcoming election, she said, votes here are very critical.

“I wish I was in Ohio, people would care more about my vote,” she said. “We can continue moving forward with President Obama, a president who has made it a priority to make college affordable.”

She said while fiscal policy is important in this election, social policy is just as imperative. She called Republican Mitt Romney’s stance on abortion “shocking” and asked the crowd to consider how Romney’s plans to overturn Roe. V. Wade would affect the women in their lives.

“(Romney) wants to take away women’s right to choose what happens to their body,” she said.

Bryan Staul, President of the KSU College Democrats, said Kent State’s status as the 2nd-biggest university in a battleground state makes it a political hotspot for campaign stops this year.

“I think it should have always been like this,” he said. “But I think this year, with the improvements to the university, it just makes sense to come here.”

Staul said the College Democrats expect to see an increase in student involvement after Munn’s visit like the spike after President Obama’s stop in September.

“We’ve noticed an increase in people who are phone banking and knocking on doors,” he said. “I think everyone is very optimistic about the chances.”

Nick Gould, freshman exploratory major, said he thinks early voting is important because it gives students more time to cast their ballot in the midst of a chaotic schedule. He said although Munn’s visit was an added bonus, he was really there to get his voice heard.

“Yeah, it’s really cool that we get to see a celebrity, but I want to get my vote in,” Gould said.

Albert Schehr, sophomore exploratory major, was invited to the event by one of his friends on Facebook and said he wanted to get more involved in campus activities after seeing President Obama speak last week. Schehr said he’s a big believer in advocating for the issues that he is passionate about.

Evan Gildenblatt, Executive Director of the Undergraduate Student Government, said that the reason he thinks there are still so many students who choose not to vote is because many may feel disenfranchised with the political process or have come to believe their votes do not count.

“I implore them to reconsider because it’s so important for me as a student representative to be able to have my constituents raise their concerns and voice their opinions,” Gildenblatt said.

The deadline to register to vote is Oct. 9. Students can still vote absentee or in-person until Nov. 2 at their local Board of Election office.