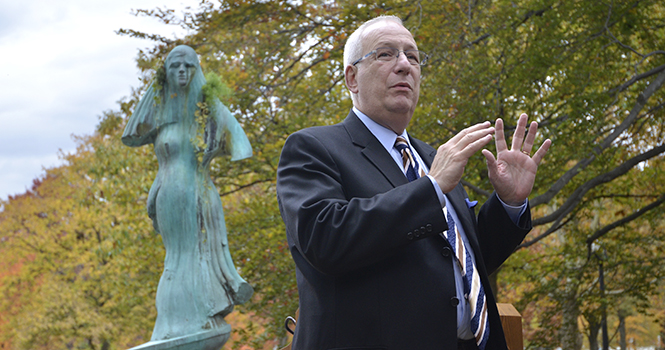 Created in the image of a woman, the piece is made of bronze and time has added tints of a copper color to the turquoise figure. Described as a “living” or “organic” sculpture, it has been filled with soil and is now host to plants and vines which are expected to cover the base.

Artist Robert Wick, working with university architects Brian Pickering and Tom Euclide, created the sculpture, according to a press release. Wick decided to relocate the piece from New York as a gift to Kent State in the memory of his first wife, the late Sidney Barnes Wick.

“This site is the only place I can imagine it belonging,” said Wick, who remembers meeting his first wife at the Campus Supply store on the edge of campus.

Both have deep ties to Kent State.

A 1957 graduate, Wick was formerly a faculty member in the School of Art and he helped to co-found the Wick Poetry Center with his brother, Walter. Likewise, Sidney Wick is the daughter of Kent State history professor Sherman Barnes.

The ceremony began at 4 p.m. with a welcome from Gene Finn, vice president of Institutional Advancement, and a dedication from President Lester Lefton.

“I think what [the sculpture] exemplifies is that art is something very special and Kent as a community is very committed to it,” Lefton said, describing the “humanizing” impact of creativity. “We have to embrace art as fundamental to what we do.”

Following a similar thought, Wick then spoke of the history and purpose of the 40-year-old sculpture, which he hopes will stretch imagination and encourage curiosity. His words were delivered with visible emotion as he explained the sculpture and the description which reads “wife, mother, muse / in life and death”.

“Even though her eyes are closed, they’re not closed to death — they’re closed to dream,” Wick said. He described dream as the heart of his art, and his first wife as a part of that mystery.

The director of the Wick Poetry Center, David Hassler, introduced three students who then read poems inspired by a summer trip to Wick’s home in Bisbee, Ariz. Dennis Brown, Robin Scheuerman and Eleanor Shorey were among five students invited to the week-long summer writing workshop.

“We had a lot of great opportunities to absorb his work,” Hassler said.

The students remarked that it is similar to the sculptures they had seen in Arizona. Scheuerman said the sculptures were often “reminiscent of the landscape,” including vegetation and natural elements.

“The sculpture will stand the tests of time, but the plants come and go,” Shorey said.

The ceremony closed with a word from Mindy Aleman, executive director of the Center for Gift and Estate Planning, who had described the sculpture as “poignant” and nurturing to the spirit.

“We are thrilled that she is back here and that we have a permanent place for this incredible piece,” Aleman said before the ceremony.