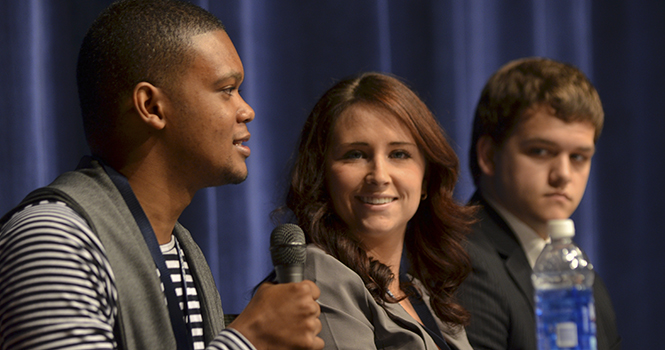 At the Entrepreneurship Extravaganza on Wednesday, three Kent State students, Ryan Golphin, Rachel O'Neill and Chad Radke spoke to a ballroom-full of high school students about the major at Kent State. Photo by JACOB BYK.

Nobby Lewandowski appears on stage, exclaims how much he loves Kent State and breaks into song with his own rendition of the legendary Frank Sinatra song, “New York, New York.”

“I did that for one reason and one reason only, I stutter, since I was about six years old,” Lewandowski said. “Well, let me tell you something people. Whether you are big, tall, small, you have a wooden arm or are in a wheelchair — that’s life,” Lewandowski said. “Somebody dealt you that hand… You can change that hand because you’re on Earth once. So, play the hand you’re dealt.”

• Do what is right; avoid what is wrong.

• Do the best you can. Shut your mouth, respect everybody, try the hardest you can, and you will be a success.

“While we cannot all leave that earth-shattering legacy, we can all leave that legacy that says we have changed peoples’ lives for the better,” Lewandowski said. “If you think you are way too small to make a difference, you’ve never been in a tent with a mosquito.”

Entrepreneurs and successful people, including Jeff Hoffman, who is a co-founder of Priceline.com, appeared at the extravaganza with the hope to inspire students to try to be entrepreneurs.

“The reason I make my time to come to Kent State and support it is because they have wonderful entrepreneurship programs here,” Hoffman said. “If you go down to the lobby after this, there is a big thing called the LaunchPad that Kent State just initiated, so this is a school that believes in entrepreneurship and leading you to it.”

Hoffman believes that if people pursue what they are passionate about, they will put more energy into something they really care about.

The Entrepreneurship Extravaganza continued on Thursday with a panel discussion, led by Denise Easterling, an entrepreneurship experiences professor, with student entrepreneurs. The students started off by introducing themselves and their businesses.

Among the entrepreneurs were Tara Bresette, Rachel O’Neill and Jennah Sufayyan, co-owners of Snapcessories, an interchangeable hair accessory company.

“Instead of just buying hair accessories from Target or Claire’s, you could buy a headband, and then just buy accessories that you can change out every time,” Bresette said. “ You could save so much money instead of having to continue buying so many accessories.”

Also on the panel were Breana Jacobs, junior nursing major, and Chad Radke, junior entrepreneurship major, who spoke about their award-winning product, Fresh Scent Surgical Masks. Hiram College hosted a competition in March where students could pitch their ideas to a panel of judges. Jacobs and Radke came home with the third-place prize of $1,000.

Entrepreneurship Extravaganza featured workshops, panel discussions and speakers with the hope to give students an opportunity to network and learn from entrepreneurs who turned their ideas into successes.

“When you start working, work like you don’t need the money,” Lewindowski said. “Love like you’ve never been hurt. Sing like nobody’s listening. Dance like nobody’s watching, and I wish you all the best of luck for the rest of your lives.