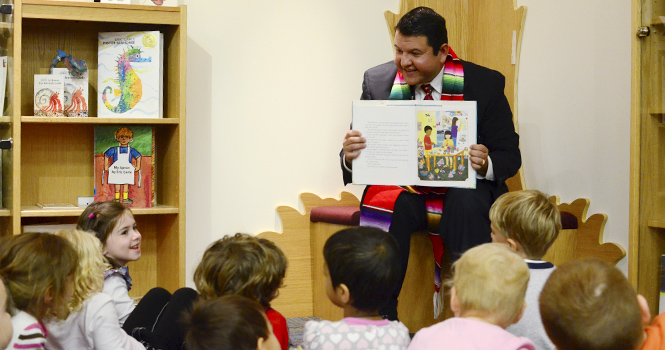 David Garcia, associate vice president for enrollment management, reads to children from the KSU Children's Development Center in the Reinberger Children's Library in the main library on Oct. 10. Garcia read the books in English and Spanish because he said it is important for them to hear the different languages during Hispanic Heritage Month. Photo by Nancy Urchak.

David Garcia wanted to show children at a reading that all cultures have families and traditions for celebration. He found common ground in this diverse group of children with one question.

“I think this is one of the many opportunities for younger kids to understand we are all different,” Garcia said. “We can be taller, shorter, blue eyes or green eyes — different is good.”

Garcia, wearing a traditional Hispanic scarf, read two picture books to the children, “Hooray! A Piñata” and “We are Cousins/Somos Primos.” Shelves lined with storybooks and over-sized stuffed animals served as the backdrop for story time with the children.

“The message needs to be clear for these younger children,” Garcia said. “In preparation for this, I had to think of what message I wanted to relate to these young folks that is appropriate and have the greatest impact.”

“Different people have different ways of celebrating things, and that is OK,” Garcia said to the children, who enthusiastically talked about their experiences with piñatas.

One girl told Garcia about her cupcake piñata while another boy talked excitedly about his monster piñata.

“We are Cousins/Somos Primos” reinforced family, an important part of Hispanic culture.

Garcia asked the group of children about their families and received two or three answers about mothers, fathers and sisters. As soon as one child mentioned his dog, the children responded to Garcia about their pets at home.

“Yes, pets are part of your family too,” Garcia said to the children.

The event, held by the School of Library and Information Science, took place in the Reinberger Children’s Library on the third floor of the library. The floor features the Marantz collection of children’s picture books.

Dr. Kenneth and Sylvia Marantz donated the collection to Kent State in 2008, which is used as a resource for students and faculty.

The collection of more than 24,000 picture books is the only in Ohio organized by an illustrator, not author. This library also features every Caldecott and Newbery winner since the beginning of both literary awards.

Garcia created the Latino Networking Caucus when he arrived at Kent State three years ago. He said he set out to create a nonprofit organization focused on the Hispanic outreach efforts.

“The most exciting thing about these activities was, for the first time since arriving at Kent, I saw students enjoying themselves and the experience,” Garcia said. “It was exactly what I was hoping for.”