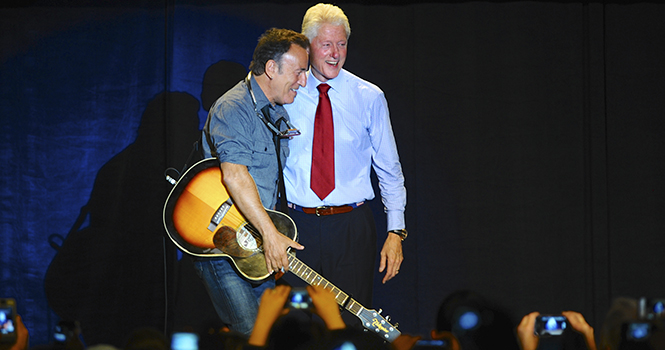 Bruce Springsteen rocked and former U.S. President Bill Clinton talked. Both touted Barack Obama's compassion for the middle class calling out the Romney campaign for being out of touch with the average American. Photo by LAURA FONG.

It’s not every day that a former president serves as an opening act, but that is exactly what happened at a rally for Barack Obama in Parma Thursday.

“I had 20-something jobs before becoming President,” former President Bill Clinton said. “But this is my first time warming up for Bruce Springsteen.”

Congresswoman Betty Sutton welcomed the crowd of 3,000 to Cuyahoga Community College saying one man ran the nation and the other was born to run. As Clinton thanked her and took the stage, he said Ohio and the United States both need her in Congress.

Clinton started out saying he’s a job guy and that before President Obama took office, the United States was losing 800,000 jobs a month. While he did not go into specifics on how, he said the Republicans had done a lot to keep unemployment above 8 percent and they were crushed when it fell to 7.8. Clinton said they are still not satisfied with that number, but it is the biggest one-year drop in 17 years.

He said he doesn’t think everything is perfect in the United States, but that it is a long and slow climb to get where we need to be and that President Obama can do it.

Another point Clinton focused on was reform being done to reduce student loan debt. He said that if President Obama is re-elected, the interest rates on loans would be lower, allowing more people to get a college education. He also said that repayments of the loans would be based on how much income is made.

Clinton closed his speech by saying, “There’s no going back, we’re coming back,” then he introduced “one of the most important forces in American music and one of the coolest guys I’ve met, Bruce Springsteen.”

Springsteen admitted that speaking after Clinton is similar to singing after Elvis and quickly started strumming his guitar starting with “No Surrender.”

Springsteen said that a lot of his music is based on the distance between the American dream and reality and that voting is the only way to determine that distance. He said that voting gives people an individual hand in shaping America.

Springsteen performed a six-song set that included “Born to Run,” “Youngstown,” “We Take Care of Our Own” and “This Land is Your Land.” He accompanied himself on the guitar and harmonica.

Kari Wetzel, Baldwin Wallace graduate student, said she had never been to a rally before and she loved it. She said she voted early last week and that everything she heard today reaffirmed her decision and she believed in everything that was said.