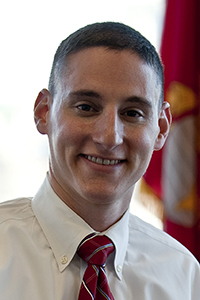 “During his time in Washington — unemployment up, gas prices up, tuition up, health care costs up,” Mandel said.

The hour-long debate was split into four sections: opening arguments, questions from a panel of journalists, questions from the audience and closing arguments. While both candidates claimed they would “take a back seat to nobody” when it comes to solving the big issues, they repeatedly attacked one another on issues of credibility.

Mandel distanced himself as an outsider to Washington culture, noting Congress’ all-time low approval rating and failure to pass a budget in three years as evidence that America needs a change.

“Can you go three months without discussing your family’s finances around the kitchen table?” Mandel asked. “Politicians in Washington live by one set of rules; all the rest of us have to live by a different set of rules.”

Mandel said he would apply his record — which includes voluntary budget cuts — in the state treasurer’s office to his work at the federal level.

“Imagine those kind of results in Washington,” he said. “Imagine that kind of fiscal responsibility in Washington. The only way we can change Washington is to change the people we send there.”

Mandel said he would not have voted for the auto industry bailout of 2009 because it stripped pensions from middle class retirees. Brown said this position “boggles the mind” because the 800,000 jobs saved weren’t just in big assembly plants but everywhere across the state from airbag producers to steel workers to transmission specialists.

“Josh Mandel called my vote for the auto rescue ‘un-American,’” Brown said. “I call that vote doing my job to fight for their jobs.”

Brown used his recent endorsement by the Cleveland Plain-Dealer — a newspaper that supported his opponent Mike DeWine in 2006 — to buoy his claims that “we’re moving in the right direction.”

“These papers don’t trust him because he believes in the same trickle down economics that got us into this situation in the first place,” Brown said.

Mandel also defended claims he hired his close friends and “cronies” for top-level positions in the state government.

“I will take the qualified professionals in our office and stack them up against anyone in your office,” Mandel said.

Both candidates addressed the issue of term lengths and promises to limit their time in office. When an audience member questioned Brown’s 1992 promise to serve only 12 years in Congress, Mandel claimed Brown “lied to the people,” a comment some in the audience booed.

Brown admitted it was a “mistake” but counterattacked the treasurer’s Senate ambitions before completing one full term as state treasurer.

“He has the nerve encouraging his friends to ask questions about term limits when clearly he has no regard for any of that,” Brown said.

When an audience member brought up the issue of women’s reproductive rights, she told Mandel his pro-life positions “clearly don’t support” women. In response, Mandel recognized his wife as his “rock” and said women have expressed more concern to him about the state of the economy.

“I believe the number one issue for women in this election … is jobs,” he said. “What women want me to concentrate on is a better economic environment for their kids.”

“Unlike Josh Mandel, I trust Ohio women to make their own health care decisions,” he said, adding, “I would note the non–answer, but that’s been on par for much of this debate and much of his campaign.”

In the end, both candidates came back to the issue of credibility while at the same time claiming they would reach across the aisle. Mandel said in his concluding argument he would “rise above partisan politics” to hold politicians accountable for their actions.

“If you’re sick of the bickering, the infighting … then I’m your guy,” Mandel said. “We are not going to change Washington by sending Sherrod Brown there.”

Brown said Mandel “can’t be trusted to show up for work and do the job he was elected to do.”

“We’ve seen a lot of these kinds of campaigns from Josh Mandel. We’re seeing it again today: attack, attack, attack,” Brown said. “Doesn’t have to have a lot of substance.”

The candidates debate next in Columbus this Thursday, and the last debate will be Oct. 25 in Cincinnati.