Senate candidates have big ambitions about jobs in Ohio 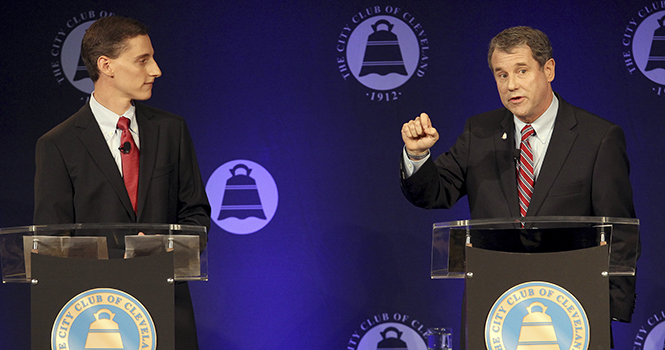 Ohio Senator Sherrod Brown makes a point during the debate with Ohio Senate candidate Josh Mandel, left, held by the Cleveland City Club at the Renaissance Hotel in downtown Cleveland, Ohio on Oct. 15, 2012. Photo by Chuck Crow, The Plain Dealer.

No matter which Ohio Senate candidate takes the podium, three topics of conversation always gets him talking: jobs, jobs and jobs.

State Treasurer Josh Mandel uses the word as part of his campaign website’s address. Incumbent Senator Sherrod Brown claims he has returned 500,000 of the 5 million manufacturing jobs that Ohio lost from 2000 to 2010 and attacked China’s unfair trade practices during his six-year term.

But no matter what their plans, both agree something has to be done to create more jobs across the state. The Associated Press reported in April that 53 percent of recent college graduates are jobless or underemployed after an analysis of bachelor-degree-holders under the age of 25.

Brown said a country halfway around the world could be the root cause.

“As long as China cheats on currency and subsidizes water and energy and land and capital, we’re gonna continue to lose manufacturing jobs,” he said.

Ohio, which is ranked third in the country in manufacturing output, has been affected by China’s economic policies — and that affects graduating college students seeking jobs, Brown said. When China “cheats” by deflating its currency relative to the U.S., he said, jobs ship overseas.

“I think regardless of what kind of course of study or career you want to pursue, it matters,” he said. “Lots of health care jobs and IT jobs depend on [a] vibrant manufacturing base. We’re not a manufacturing state only, but much flows out of that.”

Mandel said he would perform a “top to bottom review of every regulation in Washington” to determine how each one impacts economic progress on a daily basis.

“Sherrod Brown voted against jobs in Ohio,” Mandel said. “He voted against blue-collar men and women in Ohio, and I think he’s going to pay for that on Election Day.”

Mandel cited the Ohio Manufacturers Association’s report last year that an EPA regulation on an electrical utility’s output would result in more than 50,000 lost jobs across the state. However, the truth behind some of Mandel’s claims are questionable.

PolitiFact, the nonpartisan fact-checking website run by the Tampa Bay Times, has rated nearly one-fourth of Mandel’s statements as “Pants on Fire,” compared to Brown’s 4 percent. One claim in particular that accused Brown of supporting an EPA regulation that would burden economic growth earned a rating of “Mostly False.”

“My opponent has a reputation that you simply can’t trust him,” Brown said. “I always have, and will continue to, check what I say against the facts and you’ll find that I do everything I can to be as truthful as possible in all these details.”

Taxes also have both candidates attention. Mandel described the corporate tax rate, among the highest in the world, as “stupid” because it puts job creators in America at a competitive disadvantage.

“When large multinational corporations like General Electric can file a 56,000-page federal tax return and pay zero taxes, it’s a mark of a broken system,” Mandel said. “It’s time to time to start over.”

Brown, on his own merit, was “false” when he estimated Mandel’s tax cuts would give “$700 billion to millionaires and billionaires” because he unfairly applied a 10-year estimate to a 2-year interval.

“These politicians that are saying more tax cuts for the rich, and then cutting programs, cutting infrastructure spending, again, like medical research, highways, and community colleges … they’re so wrongheaded,” Brown said.

Despite all the differences between the Senate hopefuls, the Republican challenger said he would be willing to cross the aisle to make job market reforms.

“We need to do a better job of putting them to work so they are paying into the system, and so they can [put] food on the table for families,” Mandel said. “It’s not a Republican or Democrat issue; it’s a bipartisan issue. It’s one we can work on together.”