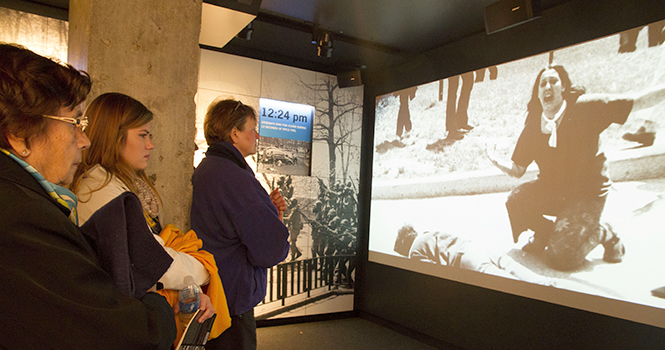 Overlooking the Commons — where the Ohio National Guard fired into a crowd of students May 4, 1970 — a 1,900-square-foot space in Taylor Hall produces haunting imagery to illustrate the despondency of the Kent community after one of the worst tragedies in American history.

After the May 4 Visitors Center officially opened to the public as part of Kent State’s Homecoming celebration, Dean Kahler feels as if the university has fully acknowledged the events it spent so many years attempting to distance itself from.

Kahler, a freshman at Kent State in 1970, was permanently paralyzed from the chest down when he was struck in the back by one of the bullets fired by the National Guard.

Kahler said he believes that the center not only does justice to the victims of the shootings, but gives historical purpose to the event. For years, the university tried to put a veil on the May 4 events and this final memorial gives closure to the university and those affected, Kahler said.

“It lets the university put it to rest,” he said. “Every time I would come up here, there were four or five people wanting to know where everything was and I’m sure there were thousands of people every year walking through wondering where [the memorials] are.”

The center, a $1.1 million multimedia experience, uses a series of historical artifacts to reflect on the political turbulence of the 1960s. The shootings that took the lives of four Kent State students and wounded nine others are documented through photos, newspaper articles and video footage.

Laura Davis, director of the May 4 Visitors Center, said she hopes the exhibit will resonate well with students. She said the events of May 4 are a perfect example of the manner in which students can change public discourse and even public policy.

“It shows [visitors] that young people can make a difference, but also shows them that they can be an ambassador for Kent State by going out and making others familiar with what really did happen,” Davis said. “It shows them that the students who were killed and wounded were just like them.”

Among the exhibits featured is a brief documentary that humanizes the faces of the four fallen students, said Carole Barbato, a communication studies professor at Kent State’s East Liverpool Campus. Barbato said that the real purpose of the center is to give visitors an objective understanding of what took place on May 4.

“I’m hoping what visitors will do is ingest the facts, look at all of the information that we have presented and arrive at their own conclusions,” Barbato said.

Ashton Potter, senior fashion design major and member of the May 4 Task Force, said she especially appreciated the dynamic setup of the exhibits. The center follows a logical transition from historical context to evidence of the national public outcry that followed the events, she said.

The center is located in room 101 of Taylor Hall and will be open from noon to 5 p.m. Monday through Thursday and Saturday. Admission is free.