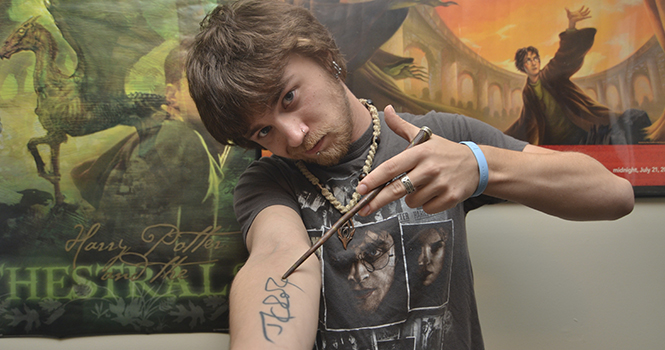 Stephen Petrick, sophomore fine arts major, in his apartment in Kent on Thursday. Petrick won the Guinness World Records for the most Harry Potter paraphernalia, which he has been collecting for 13 years as of November. Photo by Jacob Byk.

In sixth grade, Steve Petrick failed English. Thirteen years later, he made it into the Guinness Book of World Records, all because of the popular book series about a young wizard that took the world by storm. When the 2013 edition of the Guinness Book of World Records was released Sept. 11, Petrick received the title of “World’s Biggest Harry Potter Fan.”

Two years ago, Petrick, sophomore fine arts major, was dubbed “America’s Biggest Harry Potter Fan” after his fan video on YouTube received the most votes in an online contest. His impressive 1,200-piece collection of Harry Potter memorabilia worth $14,000 plus four tattoos — one which outlines where author J.K. Rowling signed his arm — and the fact he’s read each book more than 100 times helped land him this title.

“I’ve got wands coming out the ass,” Petrick said.

How does one come to love a story so much that their passion is recorded in history books? For Petrick, it meant being grounded. After failing English, his parents allowed him only to do homework and read, so his grandma gave him the first Harry Potter book, “Harry Potter and the Sorcerer’s Stone.” Petrick found comfort in relating to the fellow 11-year-old, for he was also miserable, bullied, and had few friends.

“It really gave me comfort at a time when I had none in my life,” he said.

Petrick said he first viewed the wizarding world was an escape, but it later evolved into a guide.

Because Steve “grew up” with Harry, in the sense that they were the same age throughout the series, Harry was Petrick’s first real friend and mentor.

J.K. Rowling’s world also sparked creativity and imagination in Petrick. As a fine arts major, Petrick’s artwork reflects his love for Harry Potter. In fact, some of his “biggest, nicest pieces” have been inspired by the series.

His Harry-inspired work is not limited to visual arts, but also includes the written word. Petrick has written his own fantasy novel inspired by Harry Potter that is now 13 years in the making. It was originally a “knockoff” that he started after reading the first book, but he has since shaped it for a more adult crowd even though it has some Harry Potter qualities. The book should be finished and available by Christmas.

Though Petrick’s fan collection is extensive, one thing he doesn’t have is the last movie.

“It’s the biggest pile of crap,” he said.

Though he considers himself a “Harry Potter hipster” in the sense that he was a fan before the movies turned his love “mainstream,” he does enjoy the film versions as a whole.

“If it wasn’t for the movies … the fandom wouldn’t be so big, and I wouldn’t be the king of those nerds,” he joked.

Since the video, Petrick says he’s met more people at Kent and is no longer the Harry Potter nerd down the hall.

Normal guy, Harry Potter Hipster, or King of Nerds, one thing’s for sure — Steve Petrick is a man who knows what he wants.

“Just give me an hour with Albus Dumbledore and I’d be satisfied for the rest of my life.”