An Indian student’s perspective on President Obama coming to Kent 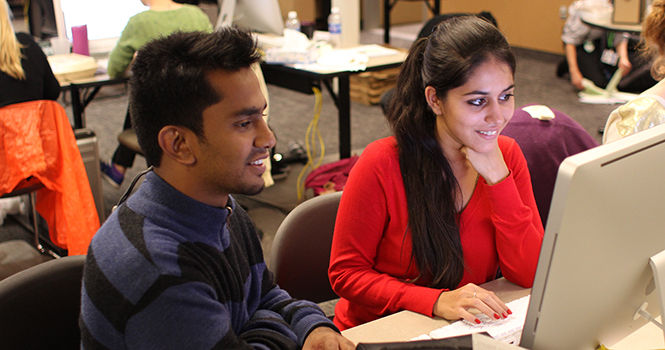 Mervyn Mathew and Ishita Kinnoo both journalsim students from Amity University work in the Daily Kent Stater newsroom on the night of Sept. 26. Photo by Brian Smith.

From lining up overnight to sitting under the rain, the energy of Kent State students and residents was overwhelming to watch. As the time came close and the gates of M.A.C. Center opened, the excitement of seeing the 44th president, Barack Obama, coming to Kent reverberated through our spines and the American people. While waiting to enter and face the moment of pride, there were Obama buttons and shirts with pictures of him and his family being sold everywhere, promoting the campaign.

On seeing the enthusiasm of students, Kent State student Lindsey, 21, said, “I am excited that after many decades the president of the United States of America is visiting Kent and it is a very sentimental moment for all of us. I don’t regret standing under the rain, feeling cold, as I am proud. That’s it!”

“Seeing the President of the most powerful country, who is known for his warmth and love for all, right in front of our eyes was the most mesmerizing experience of our lives, indeed.”

The presidential campaign in Kent, Ohio greatly differs from what we experience in India. An energetic environment is something that is rare to find in our presidential speeches. It was more fun with music playing all around.

The camera flashes focusing the floor for Barack Obama to walk is something that came up as a surprise as we have a rather formal and strict approach towards such events. Congressman Tim Ryan addressed the audience in a way that he was able to enlighten the crowd with positive facts about the Democratic stance with a brilliant sense of humor, which is very unlikely to be found in most Indian politicians. The Pledge of Allegiance and the national anthem recited together just before the president arrived gave us jitters as the audience clapped in between the anthem, which was sung expertly by Nichele Scott.

Bryan Staul, president of Kent State’s College Democrats, gave an exceptional introduction to the First Man of the United States of America, inviting him to the stage. We forgot everything as our hearts stood still seeing him walk through the stage towards his podium. We shouted till our throats went dry, and clapped till our palms started to ache with the craze and excitement of someone we admire, too. Seeing the President of the most powerful country, who is known for his warmth and love for all, right in front of our eyes was the most mesmerizing experience of our lives, indeed.

Hearing every word, seeing every smile, feeling every emotion and believing how he cares for one and all, yes, we found him to be “the people’s president.” He was, in fact, the perfect example of a man with pride and honor for his nation, grace and confidence, keeping no difference between a man and women, rich or poor, literate or illiterate or different religions and ethnicities. He was not the sort to run away from problems but had the rationality to deliver perfect suggestions that would create a much better economy and use the capabilities of his people to the fullest.

We were deeply moved by his charisma and will imbibe all that he expressed with his words and character, which we will carry with us for the rest of our lives.