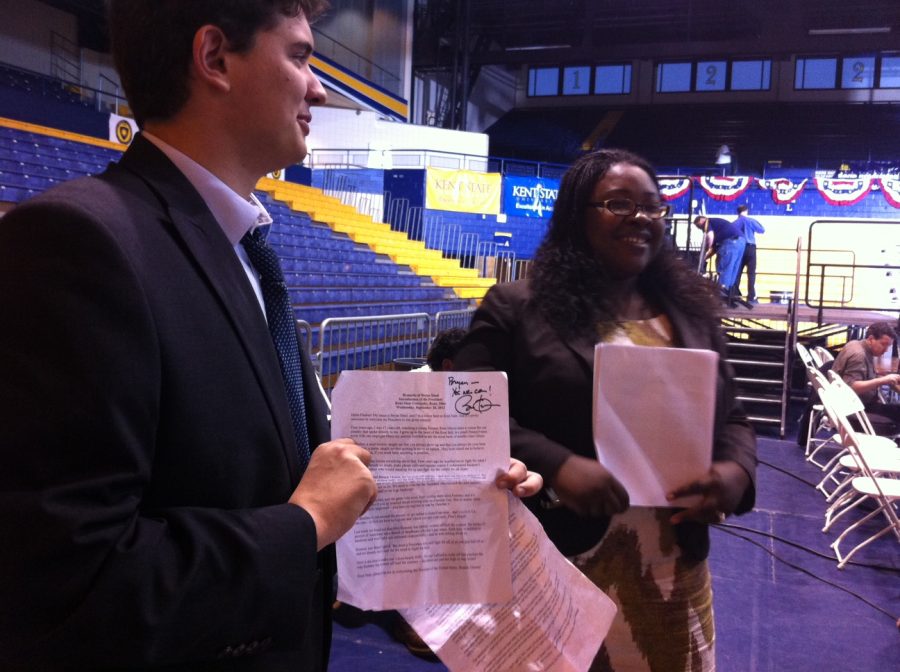 Bryan Staul, president of the College Democrats at Kent State, holds up the typed copy of his speech to show President Barack Obama’s signature.

Staul said the President lives up to the nickname “No drama Obama.”

Before giving his speech to introduce Obama, Staul said the President helped to calm him down backstage. Staul, who got choked up during his introduction speech, said he was moved by the experience.

“It’s just beautiful—watching that many people in one room believing in one thing,” Staul said.

The presidential motorcade has left campus.

People for the Ethical Treatment of Animals also made an appearance at the M.A.C. Center.

About 6,600 people were at Obama’s speech today.

The president is shaking hands with audience members.

President Obama completed his speech. He addressed an audience of 6,600 people, including those on the floor, according to Kent State Police Chief Peach.

“I am proud that Kent State has served as the location for a presidential visit,” Lefton said. “We welcome all politicians to express their views in an open and collegial way. It is the free exchange of ideas that makes universities great and, indeed, our country great. Our community welcomed the president warmly and with appropriate respect for the president of the United States.”

There are 1,100 more attendees here at Kent State than at the President’s speech at Bowling Green State University earlier today.

While President Obama rallies thousands in the M.A.C. Center, his detractors are busy eliciting honks and shouts from drivers outside of Five Guys on Route 59. The protesters, or “patriots” as one woman insisted, are making their disapproval of the president’s policies clear.

Groups of students gather around a laptop to watch Obama’s speech at Tree City Coffee and Pastry. There’s a feeling of community, and there’s a small cheer in response to Obama stating he wants to “Help us work with colleges and universities to help cut the cost of tuition.”

Scott Crawford, building manager of the Student Center, said he believes no one with a ticket was turned down from the overflow ballroom.

Brian Staul of Kent State College Democrats was happy to see the number 44 gathered in the M.A.C. Center to see Obama. “Last week we found out that governor Romney wrote off 47 percent of the country,” Brian said. “He thinks we’re dead beats.”

Jeanette Ridenour, 38, of Kent, becomes emotional at the sight of President Obama’s motorcade behind the MAC Center Wednesday afternoon. “I wouldn’t have missed this for the world,” she said.

“I want to see us export more jobs. Oops, wait. I was channeling my opponent there for a second,” President Obama said.

Someone in the audience just yelled, “F*** you” following one of the president’s comments.

President Obama’s foreign policy is front-page national news because of recent Middle East protests and the UN General Assembly taking place. Despite this, domestic issues are still most important to many students.

This government is inefficient in everything it does, said Greitzer. The military is the only the thing that seems to work well. Obama is horrible and I’m sick of things like Obamacare and taxes.

“Unless you live under a rock or you don’t pay your cable bill, you’re probably aware that there’s an election going on in Ohio,” President Obama said.

President Obama has taken the stage.

Bryan Staul, president of the Kent State College Democrats, addresses the crowd and welcomes President Obama to the stage. “We’ve seen the change because we’ve been the change,” Staul said.

The president is now expected to speak at 5:40 p.m.

The overflow crowd in the ballroom watching TV2’s live feed has several open seats on the left side. The crowd appears to be calm despite being turned away from the M.A.C. Center.

FORWARD signs have just been handed out to the crowd. The crowd is anticipating Obama will take the stage within a few minutes.

The motorcade arrives behind the M.A.C. Center.

According to the US Department of the Treasury’s Debt to Penny Report, the total public debt is at $16 trillion. Niles resident Linda Richter, 59, says this issue is important to her. “As we continue with positive economic growth it will get better, but that takes time,” she said.

There’s a crowd forming in the Hub to watch the live feed.

“He’s going to have to start giving me some sky miles,” Ross said.

“He’s a great orator. I think he has a fantastic vision. The only problem is, you got the house blocking everything. They say no to everything.”

The M.A.C. Center has apparently stopped letting students into the building. They are directing people to the Student Center Ballroom.

Barbara Donnola wasn’t able to get tickets to see Obama, but she still came downtown Kent today in the hopes that she will see the president. “People asked me why I wanted to come down here, and I told them, ‘It’s

the difference between buying the CD and being at the concert.'”

A 20-plus car motorcade including a limo, vans, a black SWAT truck, an ambulance, several highway patrol cars, Kent police cars and motorcycles have been spotted on campus. Police and Secret Service are stationed atop the Student Center and M.A.C. Center.

A dedicated Obama fan took more than 6 hours and 200 balloons to make this ballon Obama.

No more ticket holders are currently being let into the M.A.C. Overflow seating will be at the Student Center ballroom.

Group of Kent locals armed with cameras and walkies are wandering around downtown Kent in hopes of meeting the president. “We’re very excited,” said one woman before taking off to Ray’s on a hunch.

Sophomore Matthew Katende got in line to see Obama at 2 a.m. with friends. “I knew a lot of people were coming so I wanted to be right up front,” he said. Katende said he’s feeling tired after not sleeping all night but is excited to hear what Obama has to say about student loans and healthcare.

Former workers from Delphi, an auto industry that was bailed out with General Motors, protested Obama’s speech at Kent State University Wednesday asking where their pensions were.

The group, whose petition can be found at www.delphipetition.com, is orchestrated by Bruce Gump, who worked 33 years at Delphi and is still waiting to receive his pension. According to their website, the “Obama Administration orchestrated plan, however, chose to cut the pensions of 22,000 Delphi retirees by up to 70%, while providing full pension benefits for over 500,000 other retirees in the same companies.”

The protestors stood outside the M.A.C. Center where people stood in line to hear President Obama’s speech until security asked them to move down to the Risman Plaza. The group then stood in front of the Student Center.

Protesters outside the MACC claim President Obama’s administration protected union worker’s pensions but “kicked them to the curb” when the government provided the auto industry with bailout money.

Local businesses are all in a buzz in anticipation of the arrival of President Obama. Many of the businesses have created banners to welcome him. “The most exciting part is that it’s an actual president coming to Kent,” said Karen Duffy, Huntington Bank employee.

Right now the line to get into the MAC Center stretches around Olson Hall to the MAC Annex, around the Annex, down Midway Drive, around Prentice, past the tennis courts turning at Oscar Ritchie Hall and past the Honors College.

Kent resident, Helena Belden, said she wants to hear from Obama regarding energy. “I want to hear that he is going to be coming up with ideas that don’t involve drilling. I’d like to see us as free of Arab nations as possible.”

A lot of people in their mid-20s hunkered down at Tree City Coffee on this rainy day. “Clearly Obama’s here to get votes from younger people,” said Sebastian Roland. “It’s interesting that he’s here and not Harvard or Princeton. I think he came here to connect with his demographic.”

The National Press has arrived on campus.

A janitor with a kind heart hands out trash bags and gets soaked herself.

When the rain started pouring on those waiting outside for the President, a Kent State housekeeper came to the rescue. “It started coming down and I was like, ya know what, I bet there were people who don’t have umbrellas. And I was like, you know, bags work,” said Brenda Jones, soaked from head to toe.