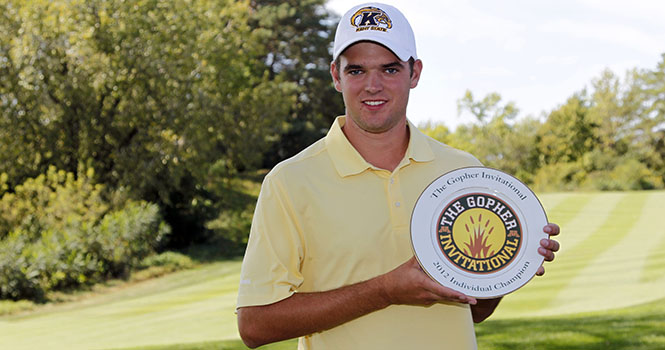 The All-American shot a final round of 68 (-4) after starting the day one over for the tournament.

The rest of the men’s golf team was unable to follow suit, as the No. 13 Golden Flashes finished fourth place overall.

The University of California placed first with a team-total of 862 (-2). Southern Methodist University was second, followed by Arkansas in third.

Heavy wind and cold weather plagued the Flashes during the final round, but Conners was able to manage through the conditions.

“I just tried to make smart decisions and give myself as many opportunities as possible,” Conners said about the inclement weather.

Conners was one of the catalysts of last season’s fifth-place men’s golf team. The junior All-American placed fourth overall at the 2012 NCAA Championships — the best-ever finish for a Kent State golfer at the NCAA finals.

“It definitely proved we’re elite,” Conners said. “It made us feel like we deserve to be with the best in the country.”

Conners fought back from an eight-stroke deficit in the final round to tie California’s Max Homa. The junior Flash was deadlocked with Homa heading into the final hole and was able to sink a clutch par putt. Homa subsequently bogeyed the hole, sealing the victory for Conners.

The men’s team next challenge lies at the Inverness Intercollegiate held in Toledo, Ohio on Sept. 17-18. The Flashes go to the tournament as defending champions from last season.