Opinion: Romney: a blowhard, but a pragmatic one 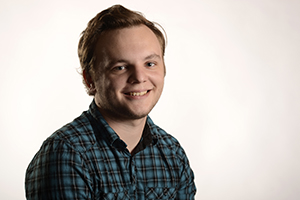 Tyler Kieslich is a sophomore news major and columnist for the Daily Kent Stater. Contact him at [email protected]

Mitt Romney is good for about one “LOL” a week, which is comforting in a political process generally devoid of humor or joy. I was terrified that the campaign season would focus on issues and facts after the Republican primary season ended, so Romney’s clumsiness and pandering has been a real win for the electorate.

The latest gaffe has the liberal media declaring Romney’s hope for victory to be in more danger than a dog strapped to the roof of a station wagon. But, as Mittens will tell you, those dreams like it up there. And so does the dog.

Romney was recorded during a fundraiser at the estate of hedge-fund manager Mark Leder — who, interestingly, was the subject of a write-up in the New York Post about an end-of-the-summer sex party he threw — candidly saying, among other things, that “it would be helpful to be Latino” and that “47 percent of America will vote for Obama no matter what” because they feel like “victims” who believe that they are “entitled to health care, to food, to housing.”

It isn’t clear why Romney, the figurehead of a Republican Party that claims to be religiously opposed to the idea of a government taxing its people for what could only be nefarious purposes, would decide to alienate the portion of population free from such tyranny. Or why these people should be disregarded because they think their governmental institutions should exist to protect them from the cold, unfeeling, random dark side of laissez-faire economics.

But the comment comes as no surprise. Of course Romney, who also claimed at the fundraiser that he earned everything in his life “the old-fashioned way,” is comically devoid of self-awareness or any sense of what life is like for people not born into immense comfort and privilege. And of course Romney, who still refuses to release his own tax information, isn’t worried about impressing the 47 percent of Americans who are outside the increasingly pale, entitled and extremist reach of the Republican Party.

It’s mostly a pragmatic consideration. Mitt Romney has no interest in wasting time courting the vote of people dependent on the very social-welfare programs he finds extraneous and plans to cut. Even for Romney, there is only so much time, money and manpower. Barack Obama has to make these same kinds of considerations.

I have an aunt who is very active in the Kentucky Democratic Party, which is kind of like being in an Ayn Rand fan club in Soviet Russia. Kentucky hasn’t voted for a Democratic candidate not named Clinton or Carter since 1960. The state is especially red now, with the shift in focus from fiscal to social conservatism in the Republican Party.

So when my aunt works the Democratic booths at state fairs, headquarters doesn’t send any literature to pass out, instead instructing volunteers to tell people to go buy it online. The Obama campaign just can’t waste effort in a state it will never win anyway.

So while Romney’s comments confirm his status as the most out-of-touch man in America, they make sense for his campaign. The Republican Party, increasingly exclusive and ideological, just can’t afford to care about people who can’t afford to join the country club.