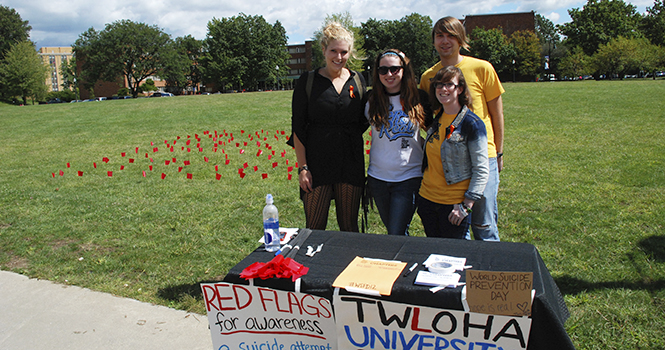 The Kent State chapter of the national organization To Write Love on Her Arms held its Red Flag for Awareness event Monday in Manchester Field.

The event was held to raise awareness on issues like suicide, depression and self-injury. The group planted red flags in the grass on Manchester Field. Each flag represents one of the many suicide attempts made every day in America.

According to the American Foundation for Suicide Prevention, someone in the United States dies by suicide every 14.2 minutes. TWLOHA also reaches out to students suffering from depression, which is one of the leading causes of suicide.

“Especially on a college campus, people need to be aware of these issues,” said Jessica Corson, the group’s founder and former president. “And it’s not talked about because there is such a negative stigma.”

In addition to the red flags on Manchester Field, TWLOHA was giving away orange ribbons with a donation of $1 or more. The money raised is being used to fund the chapter and to train new members.

In the wake of two recent suicides last year on the Kent campus, TWLOHA encourages students to seek help and reach out to others if they are contemplating suicide or feeling depressed.

Corson stressed that students dealing with these issues are not alone.

“We just want people to feel like they are accepted,” she said.