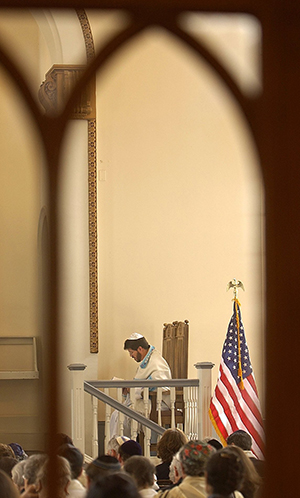 Rabbi Avi Winokur of Society Hill Synagogue, in Philadelphia, Pennsylvania, is framed through glass at the back of the sanctuary, Monday, September 16, 2002, during the celebration of Yom Kippur, which began at sunset on Sunday and ends at sundown on Monday. Photo courtesy of MCT Campus

Update: This story has been corrected to show that Yom Kippur is a holiday of atonement, not rest as was previously stated.

Most notably, President Lester Lefton will be recognizing the 25-hour holiday, which ends Wednesday at nightfall, by honoring the Sabbath and not working in order to pray and reflect.

In an email statement, Lefton said, “Yom Kippur holds a special place in the spiritual lives of most Jews… It is a serious and solemn day recognized by fasting and prayer. According to Jewish tradition, it is also the day when God decides the fate of every person, between life and death and sickness and health… [A] day when our best selves can be revealed through introspection and a conversation with God. It is written in the prayer service, for sins between man and God, Yom Kippur atones.”

This will mean that Lefton will not be attending President Barack Obama’s visit to the MAC Center.

Nicholas Campbell Hall, freshman biology major, said he felt Lefton could have made an exception for this rare event for Kent State.

“There are many Jewish people that no matter what would stay the day praying rigorously and observing Yom Kippur,” Campbell Hall said. “It would have been nice, as president of the university, to be in attendance of something that’s very historical for Kent State. But, coming from a Jewish aspect, I understand what he is doing.”

Senior Kyle Pancis, entrepreneurship major, said Lefton is entitled to keep his religion above everything else on a holy day.

“He has a public life and he has a private life and if he doesn’t want to be here tomorrow, I personally don’t disagree with him,” Pancis said. “Right now the UN is meeting and the prime minister of Israel isn’t going to be there until Thursday just because of the holiday.”

Those celebrating Yom Kippur self-reflect and reconnect with God. This can be especially difficult for college students in the midst of the semester.

Calling the day near “impossible,” Campbell Hall said that this year the holiday has been led up to like no other year.

“As a college student, especially with tests and homework, it almost becomes impossible,” Campbell Hall said. “It crept up on me this year and it does present a hurdle so I just do the best I can.”

Both Campbell Hall and Pancis said their professors would excuse an absence during the holiday.

During Yom Kippur, Jewish people fast from sunset to sunset. For any college student, it can be difficult not to grab a snack between classes.

“My freshman year, I even remember going and sitting down in the café and going to lunch with some friends and not eating,” Pancis said.

“And they would always ask me ‘why aren’t you eating?’ and I would go out of my way to tell them the reasons I am not eating.”

Just before fasting began, students met at Hillel center to enjoy a hearty holiday meal to prepare them. A symbolic round loaf of bread called challah is eaten to symbolize a new year.

“As a college student and as a Jew, you kind of need to just know your core values and who you are as a person and what you believe in and just stick by those values and if anyone asks you any questions, give them a helping hand and teach them,” Pancis said.