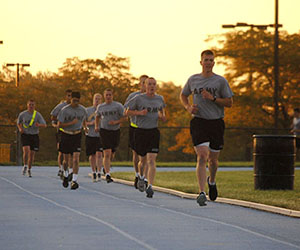 ROTC participants run around the track as part of their physical training tests at 6:00 a.m on Sept 12. Photo by Marielle Forrest.

Students in the program gathered on the track near the Ice Arena Wednesday to complete their physical fitness diagnostic tests, during which they test their endurance and strength.

“This is the starting point for all cadets at the beginning of the year,” said Zachary Macek, admissions officer for Army ROTC. “This is where cadets push it as hard as they can.”

During each part of these tests, students must do as much as they physically can because their score may affect their ranking within the program.

For roughly an hour and a half, the cadets were drilled through a series of sit-ups and pushups by instructors who shouted encouragements. Then, as the sun was just beginning to rise over the track, they prepped for a two-mile run.

After the run, cadets were soaked in sweat and gasping for breath, but many left to go directly to their morning classes.

Bill Terry, operations officer for the Army ROTC, said that the primary purpose of the diagnostic test is for the unit commander to assess the physical condition of each cadet, and another test will be administered later in the year to gauge progress.

Andrew Chewning, senior justice studies major, said that the tests can be extremely stressful because of their demanding nature.

“To succeed you have to train a lot and work hard to get the test scores that you want,” Chewning said.

He believes all the hard work he’s putting forth, Chewning said, is bolstering his character and encouraging him to aim a bit higher.

“You usually feel really good about yourself, like you accomplished a lot,” Chewning said. “Especially when you make goals for yourself and you complete your goals.”

To prepare for the tests, cadets meet at 6:15 a.m. every Monday, Wednesday and Friday and perform a wide range of exercises. The training sessions specialize in cardiovascular and muscle endurance and last at least an hour.

“I have to get up at 5:30 a.m. to make it there on time,” said Mark Honsberger, freshman visual journalism major. “Once you get in the routine, it’s easy to get up, but the first couple times it’s a pain, especially if you don’t go to bed until 11 or 12 the night before.”

The Army ROTC program prepares Kent State students for officer responsibilities in the Active Army, Army Reserves, or Army National Guard. Graduates of the program will be commissioned as Second Lieutenants in the U.S. Army, according to its website.