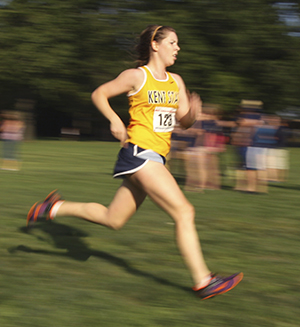 Senior Michael Heller had a standout performance Thursday at the Tommy Evans Invitational in Akron. The meet marked both the men’s and women’s first race of the season.

Heller won the men’s 4-mile race with a time of 20:28 in impressive fashion, ousting the second-place runner by 11 seconds and helping lead the men to a second-place finish overall behind Malone University.

Head coach Mark Croghan had nothing but praise for the senior standout.

“He always wants to run for the win,” Croghan continued, “I don’t think he cares who the competition is.”

Junior Steve Fischer also had a good showing for the men, placing in eighth place overall with a time of 20:57. Fischer was Second Team All-MAC last season and will be a key member for the men’s team this season.

Both the men’s and women’s teams placed five runners in the top-20 of their respective races.

Sophomore Paige Foster was able to place in the top 10 for the Flashes with a time of 19:21 in the women’s 5k race.

“To be 22 seconds between our first [runner] and our fifth on the women’s side — I thought was a great job,” said Croghan.

The women finished in third place overall behind Malone and first-place Akron.

Looking ahead to the rest of the men’s season, Michael Heller showed ample confidence in his team.

“I know I can run a lot faster, and I know all the guys behind me can run very well,” Heller said. “We’re going to be right in there competing.”

Flashes cross-country will continue next Saturday at the Iona Meet of Champions held in the Bronx, N.Y. The women’s 6K begins at 9:30 a.m., followed by the men’s 8K at 10:15 a.m.