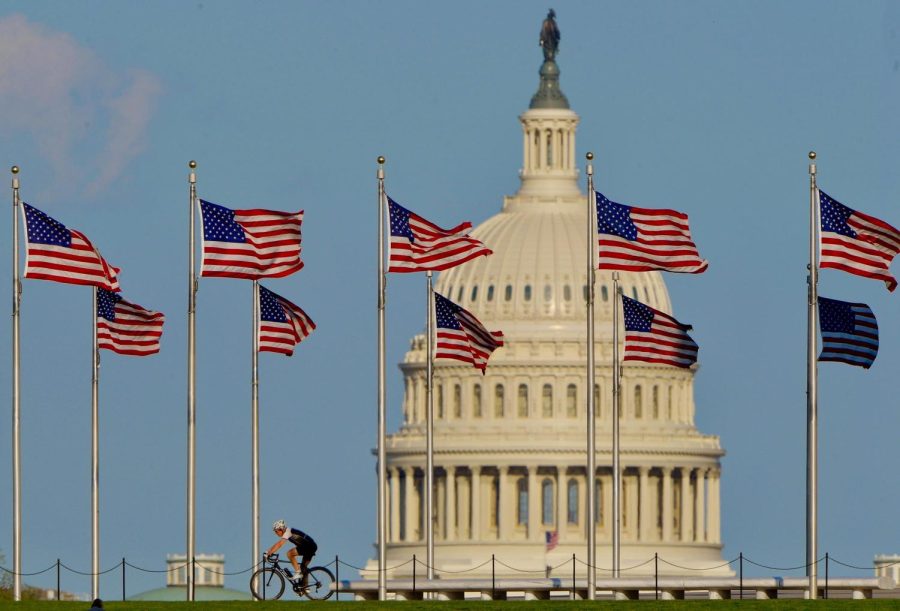 WASHINGTON, DC - APRIL 8: A lone bicyclist rides under the circle of flags surrounding the Washington Monument, the United States Capitol is prominent in the background.

(CNN) — After six years of Republican rule, the Senate could very well flip. But the party in power is not giving up without a fight.

Republicans have already narrowed the Democrats’ path, beating back well-funded Democratic bids in Iowa, South Carolina, Kansas and Texas — and taking a Democratic seat in Alabama. Democrats, however, have captured a seat in Colorado, and have their sights set on several other Republican senators.

Some political forecasters said Democrats were favored to win control of the Senate. Democratic candidates bet early on a message centered on protecting the Affordable Care Act, which they leaned into even more heavily as a pandemic heightened the health care concerns of the country.

Meanwhile Republican candidates were tied to a historically unpopular president, Donald Trump, who put even red states in play. They said for months that their loss would lead to socialism, even though Democrats chose Joe Biden, the epitome of the establishment, for president.

But Republicans hope that an economic rebound and the recent confirmation of Supreme Court Justice Amy Coney Barrett will remind voters why they put the GOP in charge, and save their Senate majority.

At a rally in Kentucky on Monday, Senate Majority Leader Mitch McConnell warned that if Democrats take back the chamber, they will abolish the filibuster to pass sweeping progressive legislation, pack the Supreme Court with liberal justices and grant statehood to Washington, DC, and Puerto Rico. He promised that if he is reelected, those measures “will not come up in Mitch McConnell’s Senate.”

McConnell won his race on Tuesday. But it is unclear whether he will control the chamber for much longer.

Republicans hold 53 Senate seats. Democrats need to win a net gain of three, and the White House, to take back the chamber.

A dozen Republican Senate seats were at risk, while only a couple Democratic senators had competitive contests.

With the parties offsetting those two seats, control of the Senate could come down to three races.

In Arizona, Democrat Mark Kelly, a NASA astronaut and the husband of former Arizona Rep. Gabby Giffords, has led Republican Sen. Martha McSally in every CNN-approved public poll this year. McSally, who was appointed to fill the seat once held by the late Sen. John McCain, has run behind Trump, waffled in her public support for him and failed to excite some conservatives. The senator has repeatedly suggested that Kelly was beholden to China due to his participation in US-China forums, but Kelly has defended himself by pointing to his record as a captain in the Navy.

In Maine, state House speaker Sara Gideon is trying to oust Sen. Susan Collins, the last Republican member of Congress in New England. Since her first victory in 1996, Collins developed a Maine-centric, independent image, winning her last election with nearly 69% of the vote.

But her approval fell during the Trump era, due in part to her support of the 2017 GOP tax plan and the nomination of Judge Brett Kavanaugh to the Supreme Court. Polls this fall show her behind in the race, as attack ads portray her as beholden to special interests.

Collins focused her message on what she has delivered for Maine, including financial relief for small businesses during the pandemic, and a promise that her seniority in the Senate could lead to more federal funding for her state. She also separated herself from Trump in a state he is very likely to lose, opposing Barrett and even declining to say who she would vote for president.

And so the race for the Senate could come down to North Carolina, where Biden has established a slim advantage, according to a recent CNN poll.

Recent revelations of Senate Democratic candidate Cal Cunningham’s alleged extramarital affair have undercut the image he carefully crafted as a man of integrity who serves in the Army Reserve. But while voters disapproved, he still has an edge over Republican Sen. Thom Tillis.

Before the sex scandal emerged, Cunningham was up 42% to 37%, according to a Times/Siena poll from mid-September. Since then, CNN released a poll showing that Cunningham’s lead had narrowed to 47% to 44%, in large part because he had maintained his lead with women.

Denise Adams, a Winston-Salem City Council member, told CNN that women “realize what’s at stake,” adding that health care, abortion access and education funding are all on the ballot.

“I ain’t trying to call nobody’s pot kettle black,” she added. “Right now, Democrats in North Carolina are united, and our task ahead of us is to bring this baby home.”

But it will be difficult for Democrats to take that trio of Trump-won states, and they may need to look in other states like Montana, where Gov. Steve Bullock is taking on Republican Sen. Steve Daines, or to a January runoff election in Georgia.

Republicans cheered a crucial victory in Iowa, where they had tied Democratic candidate Theresa Greenfield to leaders in Washington like House Speaker Nancy Pelosi. The Senate Leadership Fund, a super PAC aligned with McConnell, had spent millions airing an ad warning that “the Theresa Greenfield-Nancy Pelosi health care plan could take away our employer-provided health insurance,” even though neither Democrat backs a single-payer proposal. Democrats had charged that Greenfield’s opponent, Republican Sen. Joni Ernst, has changed, hitting her for campaign violations resulting in a Federal Election Commission fine and for buying a condo in Washington.

Ernst had also had a couple of missteps, backtracking on her suggestion that fewer people have died of Covid-19 than official health reports suggest and flubbing a debate question on the price of soybeans. But she had held slim leads in recent polls and Trump also won the state.

Trump’s presidential approval rating has never hit 50%, according to Gallup, and he polled at 46% in October, lower than the three previous presidents who were reelected, Barack Obama, George W. Bush and Bill Clinton.

Trump has remained unpopular throughout his term. He did not build the “big, beautiful” wall, but separated thousands of migrant parents from their children. He signed a tax overhaul bill into law that provided a short-term boost to the economy but added more than a trillion to the debt. He failed to repeal and replace the Affordable Care Act. He was impeached and acquitted of charges that he had used his power for political gain when he asked Ukraine to investigate Biden. He has praised Republican candidates who support him, even when they promote the baseless QAnon conspiracy theory that he is working to squash a secret cabal of pedophiles. He proposed a ban on Muslims traveling to the US. And he inflamed the racial divisions within the country after Charlottesville and the police killing of George Floyd. He ridiculed his opponents, whether they were women, minorities or senators in his own party in tough election races, like Collins, who he recently tweeted was “Not worth the work!”

Trump’s conduct has imperiled not only his own hold on the White House, but also GOP control of the Senate.

“Trump should stop tweeting about individual Republican candidates because all it does is confuse the base,” GOP strategist Scott Reed told CNN. “It doesn’t help anybody, except Twitter, and I don’t know why in the hell anybody would be helping Twitter right now.”

The steady unpopularity at the top of the ticket, along with the demographic changes of some Southern states, and a massive fundraising effort by Democrats sparked in part by the death of liberal Justice Ruth Bader Ginsburg, gave Democrats confidence that they could compete in conservative states.

Perdue, a 70-year-old former Fortune 500 CEO, has dismissed Ossoff, a 33-year-old media executive, as not knowing how to create or keep a job. Ossoff recently told CNN that Perdue’s butchering of Harris’ name at a campaign rally was “unquestionably” racist. At their recent debate, Ossoff called the senator a “crook” who was “fending off multiple federal investigations for insider trading” while attacking “the health of the people” who he represents. Perdue snapped back that the Democrat had worked for “the mouthpiece of terrorism and Communist China” — claims Ossoff called “ridiculous.” The candidates are also running against Libertarian candidate Shane Hazel, and if no one gets more than 50% on Election Day, the two top vote-getters will compete in a runoff on January 5.

Georgia GOP Sen. Kelly Loeffler’s race will go to a runoff between her and Democrat Raphael Warnock, the senior pastor of the Ebenezer Baptist Church in Atlanta. In the unusual melee election, the appointed senator faced multiple candidates, including GOP Rep. Doug Collins, who targeted the same swath of conservative voters as she did. Loeffler recently told CNN that there are “no” issues on which she disagreed with the President, leaving Warnock to claim liberal and more independent voters.

Republicans hope that John James, a Republican businessman who flew Army helicopters in the Iraq War, can defeat Michigan Democratic Sen. Gary Peters and become the state’s first Black senator. But Peters led in the polls there, and the state is pivotal to Biden’s campaign strategy.

Perhaps the greatest surprise of the election cycle was in South Carolina, which hasn’t elected a Democrat to the Senate since Sen. Fritz Hollings retired 15 years ago. In the Senate elections since 2004, the South Carolina Democratic candidate never cracked 45% of the vote.

But in his race against GOP Sen. Lindsey Graham, Democrat Jaime Harrison raised $57 million between July and September, the largest single-quarter total by any candidate in US Senate history, and lost.

Democrats have had a financial advantage in many other Senate races. Political groups have spent more than $1.7 billion to advertise in them, according to Kantar’s Campaign Media Analysis Group, 54% of which was spent by Democratic groups.

“Yes, they’re being outspent heavily with all this national money,” said Reed, speaking of Republicans. “But at the end of the day, I’m convinced they’re going to hold the Senate.”

If Democrats do capture the Senate, it will be because of women.

A double-digit gender gap is clear in a number of Senate races, according to a series of New York Times/Siena College polls over the past two months. In Arizona, for example, Kelly led McSally overall, 50% to 43%. He was down several points among men but overcame it with a substantial 57% to 38% advantage among women.

Stephanie Schriock, president of EMILY’s List, told CNN that Republican efforts to attack the Affordable Care Act, block legislation addressing the gender pay gap and their anti-abortion views have made the GOP unpopular with women. Schriock said that Trump’s behavior and “the chaos that he produces constantly” also don’t appeal to women.

“[It] is just not anything women voters are interested in right now,” she added.

This story has been updated with additional developments Tuesday.