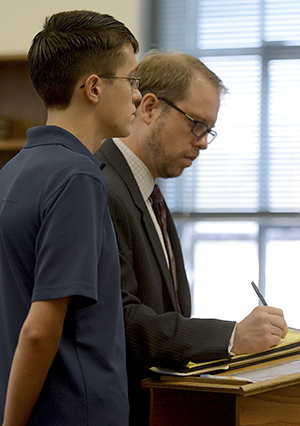 William Koberna and his attorney Paul Cristallo are addressed by Judge Barbara Oswick during an arraignment hearing on August 3 in the Kent Municipal Court. Koberna is no longer facing felony charges of inducing panic after making threats on Twitter of "shooting up" Kent State University. Koberna is now facing a charge of telecommunications harassment, a first-degree misdemeanor. Korberna's trial was pushed back after a short hearing on Wednesday. Photo by Matt Hafley.

Outside Kent Municipal Court Wednesday, William Koberna, the 19-year-old junior computer science major who posted on twitter that he would be “shooting up” Kent State, emphasized his interest in telling his side of the story. His case was eventually continued to a later date.

Koberna, of Brunswick, faces a charge of telecommunications harassment — a first-degree misdemeanor — after tweeting a 17-word, profanity-laced message made public July 25 that contained President Lester Lefton’s name and ended with “I’m shooting up your school.” Prosecutors could not be reached Wednesday for comment on the continuance.

While his lawyer deliberated with prosecutors, the former Dean’s List student and Eastway Market and Deli employee leaned against the courthouse and smoked a cigarette. Koberna explained that his tweet erupted from a brief “moment of anger” after struggling with Student Financial Aid Office.

He said he was on the phone with the university for several days trying to figure out why $8,000 in loans had disappeared from his account.

“I had no intentions of ever harming — or even offending — anybody,” he said. “I immediately regretted it.”

The day before posting the threat, through an account with the username “Charlie Sheen Jr. II”, Koberna tweeted the following message: “I can’t handle kent state I’m tired of dealing with all this financial shit. Its too confusing.”

Koberna said he didn’t even realize authorities were looking for him until four days after he posted the tweet. That’s when an anonymous university employee saw the message and notified Kent State police.

When he was engaged to talk with Kent State University Police Services, Koberna said, they told him everything would be fine.

“Then they showed up at my house,” he said, referring to his July 29 arrest by the Brunswick Police Department. “Eight cops, ready to go.”

Originally, Koberna was also charged with inducing panic — a fifth-degree felony — which a grand jury dropped during an Aug. 3 hearing. Kent State suspended Koberna July 31 and banned him from campus.

After his arrest, Koberna stayed active on social media, writing a Facebook post directed toward the anonymous university employee: “watch yourself.” On Aug. 5, another tweet informed that he would be heading to a boxing gym “so I don’t go to jail for murdering a snitch.”

The entire situation was then “blown out of proportion” after the recent shooting in Aurora, Colo., Koberna said, an overreaction that he said he understood. But now he said he’d rather it were all over.

Koberna said he was lucky enough to have found a job since his arrest, and is hoping to eventually be the first in his family to finish college.

He said he is truly going to miss the atmosphere of Kent State and the renovations downtown Kent.

“I loved it here,” he said. “I just did one stupid thing and flushed it all down the drain.”