Flashes volleyball prepares for final tournament of the regular season 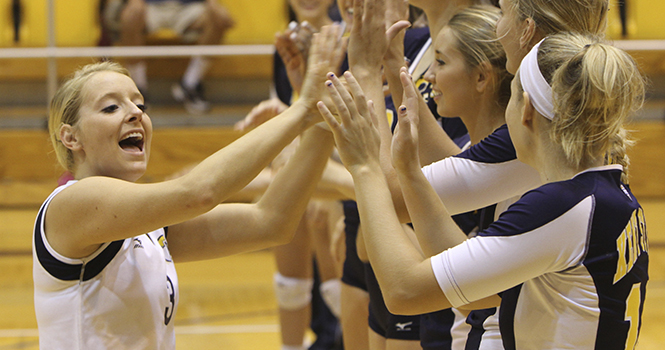 The Kent State Flashes volleyball team will continue its stretch of four consecutive weekend tournaments as they travel to Butler University to compete in the Butler Invitational.

The team will have three games over a two-day span starting at 2 p.m. Friday against the University of California, Davis, and concluding Saturday with two games against Southeast Missouri State and Butler University.

“They’re all three strong teams,” head coach Don Gromala said. “We get to play a different style with UC Davis being a west coast team. Butler is coming is coming of a win over Indiana, a Big Ten opponent, so everyone is riding high right now.”

With this being the fourth straight weekend of tournament play for the Flashes, members of the team said they are used to the grind of three games in two days.

“Tournaments are mentally tougher to prepare for because you are playing three teams in two days, as opposed to just preparing for one team,” senior middle blocker Kathy Krupa said. “It’s complicated to focus on three different teams, while in [Mid-American Conference] play we just play two teams a week so we just have to focus on those two teams the entire week.”

Through the first three weeks, the Flashes’ overall record stands at 3-6, going 1-2 in all three tournaments. Gromala said he’s looking for the team to improve on defense.

“I think we can improve on our defensive end,” Gromala stated. “We’ve got to do a better job limiting our opponents with their hitting percentage.”

Gromala went on to say the team has another set of challenges on the offensive side of the ball.

“We’re taking care of the ball pretty consistently, but it’s going to be a little bit of a challenge for us offensively because we’ve lost some of our back row players for this tournament due to injuries, so we have to take the load off of our offense with our defensive play.”

Krupa also believes the team can use this weekend to improve.

“I think one thing we can improve on is playing as a team,” Krupa said. “We’re all real good friends on and off the court, and I think if we all just play together, we could be unstoppable.”

Once the Flashes finish up their fourth and final tournament at Butler, they will head into Mid-American Conference play. The team will open up its first three conference games on the road at Miami (OH), Bowling Green and Ohio University.

The Flashes will play its first home conference game at the M.A.C. Center against Central Michigan Sept. 29.