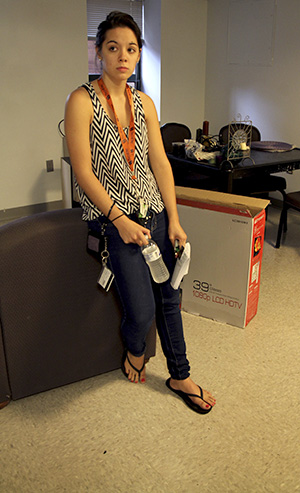 Fashion Merchandising major Myla Gordo, a tenant at Engleman apartments, looks around at her damaged apartment on Sept. 3. She and the other tenants were not aware of the existing foundational problems with their apartment, which lead to flooding in their apartment during the rainstorm on September 1. Photo by Adrianne Bastas.

“We walked into our apartment … and there was water everywhere,” said sophomore nursing major Ellen Turk, one of the residents.

Two of the students have been temporarily relocated to Koonce Hall, the other two to Centennial Court C.

“I came home on Saturday night at 2 a.m., and then my entire room was [flooded],” said Myla Gordo, a sophomore fashion merchandising major and a resident. “There was a half-inch of water [on the floor].”

The four roommates did not move out of the suite until Sunday, at which point a bad smell had overtaken the room, Gordo said.

“The next morning, which was Sunday morning, we started calling [maintenance],” Gordo said. “We couldn’t get a hold of anyone until 4 [p.m.], so we had standing water pools until about 5 p.m.”

Turk said it is uncertain what will happen to her and her roommates.

“We don’t really have a firm grasp on [when we can move back],” Turk said. “It was the worst thing that could have happened over a holiday weekend.”

Mansfield said a university architect is visiting the affected room Tuesday to decide what items can be repaired and what needs replaced.

At least one resident of Whitehall Terrace has temporarily moved to an empty unit in the complex after rain damage Saturday, as well. Of the building’s 333 units, 15 were affected.

Other affected residents were given the option to move, but their apartments are not unlivable, said Whitehall Terrace manager Shannon Kleinman.

Hannah Riedy, a junior medical technology major, said she and her two roommates plan to move into another available unit this week.

“Our ceiling was cracked and ended up falling,” Riedy said. “We’re also getting all new carpet. It’s stressful to coordinate the water damage and moving with a new school week, too.”