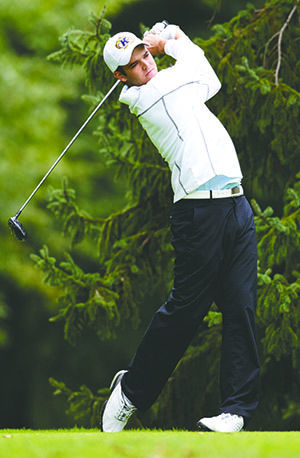 The Kent State men’s golf team concluded the Golfweek/PING Preview tournament in Atlanta in a tie for 11th place out of 15 teams.

The team’s three-round 869 total gave the Flashes a final score of +22, tying them with seventh-ranked Arkansas.

Leading the way for the Flashes were juniors Corey Conners and Taylor Pendrith, along with senior Kevin Miller. Conners and Miller were each coming off recent victories in the Flashes’ first two tournaments.

Conners finished Tuesday’s final round with a 2-under 68, giving him a tournament total of 212 and earning himself a tie for 12th place overall.

Head coach Herb Page said he has been very pleased with Conners’ performances through the team’s first three tournaments of the season.

Fellow Canadian and Taylor Pendrith finished just one stroke behind Conners with a three-round 213 total. Pendrith shot three straight rounds of 71, and finished tied for 16th.

Fresh off of last week’s victory, Kevin Miller offered a solid three-round 218 total — good enough for eight over par and a tie for 39th.

Sophomores Nicholas Scott and Taylor Zoller weren’t able to give the team their best performances with the fourth and fifth roster spots. The two underclassmen finished in 69th and 73rd, respectively.

“We needed production from one through five, and we’ve got some things to correct in practice,” said Page, referencing the lack of consistency throughout the entire team.

Kent State’s next two tournaments will also feature some of the nation’s best teams.

The Flashes’ next action will be at the Jack Nicklaus Invitational in Dublin, Ohio on Oct. 8-9.