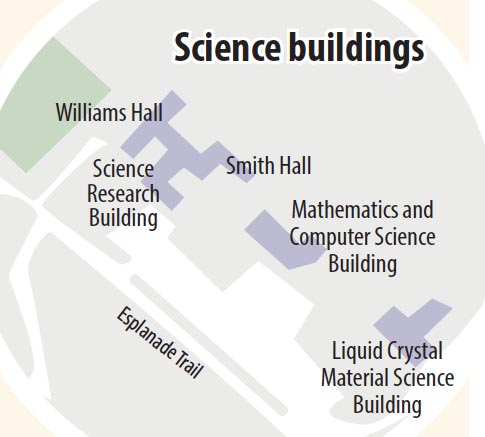 This is the third of a four-story series previewing the major building projects coming to Kent State, which were approved at last Wednesday’s Board of Trustees meeting. This installment focuses on the additions and renovations to the science buildings.

Junior biology major Jessica Zivny is taking three labs this semester in Cunningham and Williams Halls, and she said the rooms are poorly set up and cramped. Although she said the labs in Cunningham are not as bad as Williams, the lab equipment is outdated.

“I can’t stand the fact that all of our instruments and stuff that we use are ancient,” Zivny said. “That would be kind of nice if they could replace some of the really old stuff.”

What it will be:

“A multidisciplinary research facility will allow them to collaborate very closely with the researchers currently studying chemistry, biology and physics — as well as liquid crystals — and be able to hopefully have a collaboration develop and research types of reactions that typically are overlooked when you separate them into different sciences,” he said.

The relatively new College of Public Health and College of Applied Engineering, Sustainability and Technology both need research space, which these labs will provide, Euclide said.

Euclide and Chandler said the labs — some of which will be for teaching and some for research — need to be adaptable to support all the sciences that will be using them.

“The goal will be to make those laboratories very versatile so that as research changes over the years or by the grant, the laboratories can be shifted and moved to accommodate the new needs,” Euclide said.

The Board of Trustees also approved $25 million in various bonds — separate from the $170 million — that will go to making campus buildings more energy efficient and sustainable.

The updates will give nearly every building on campus fixes like new roofs, new lighting and/or new windows. Architects said the project is already underway for several buildings, including Cartwright Hall and the Business Administration Building.

“We can’t afford to burn huge sums of money on energy,” Chandler, said. “One of the problems for any university is you build a building and it’s not just the cost of the building, it’s the running of the building. And we need to make them as efficient and sustainable as possible.”

The project will reduce energy usage on campus by more than 20 percent by 2014, which is required by state law. Euclide said the buildings are all targeting a LEED Silver rating, which measures energy efficiency, sustainability and accessibility for people with disabilities.

—funded by a $170 million bond the Board of Trustees approved this summer. All bond projects are partially financed by the new university course-overload fee. Students who register more than 17 credit hours are charged $440 for each additional credit hour.

Science building renovations could begin as early as Summer 2013, but construction will likely last longer than the rest of the bond projects, Euclide said. The university will have to frequently shuffle students and faculty among the buildings in order to renovate while they remain occupied.

Chandler said renovating buildings that must remain in use is like “building the airplane while you’re flying it.”

“One of the problems with renovations is it’s not always possible to know exactly how much it’s going to cost you,” Chandler said. “When you’re building a new building, you know exactly what’s going into it, you can cost it out and it’s easy. When you’re renovating, sometimes you come across problems that you didn’t expect to find.”