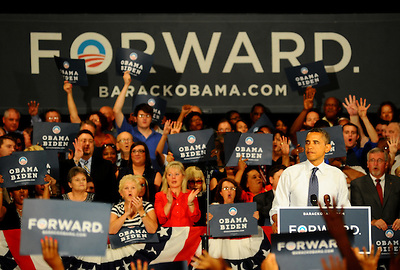 Obama visited Akron, Ohio, today to announce what he calls his “vision for the middle class,” a vision that includes strengthening the economy, creating jobs and cutting the deficit by more than $4 trillion.

The President’s campaign released an Ohio-specific report called Two Visions for Middle Class Taxes this week to highlight the President’s plan and explain how his plan would affect Ohio families. The report breaks down the differences between his plan and Republican opponent Mitt Romney’s plan to create jobs and fix the U.S economy by November.

According to the report, Romney’s plan would get rid of current tax cuts for the middle class and families who earn less than $250,000 per year – a total of approximately 4.3 million families in Ohio – would see a $2,200 tax hike per year. Obama’s plan is to maintain the middle-class tax cuts and implement additional taxes on families with income over $250,000 per year. The President told Ohioans today that he wants to keep money in the pockets of working families, and tax those who can afford to be taxed.

“Romney says he’s going to cut the deficit by 5 Trillion dollars, and who gets the bill for that? You do!” Obama said, pointing to the lively crowd of 3,000 who gathered at the John S. Knight Center in downtown Akron.

Obama insists his plan focuses on the working family, creating jobs for teachers and civil servants and making sure that military servicemen and women have good jobs to return to in Ohio communities.