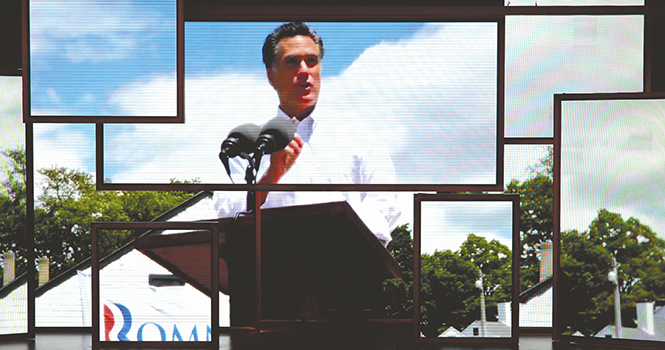 Republican presidential candidate Mitt Romney is shown on a bank of video monitors on the opening day of the Republican National Convention on Monday, August 27, 2012, at the Tampa Bay Times Forum in Tampa, Florida. Photo courtesy of MCT Campus.

Mitt Romney was formally nominated as the Republican Party’s official candidate Tuesday to run against President Barack Obama in the general election.

Delegates from each state pledged their support for their preferred nominee during the second day of the delayed Republican National Convention.

Stephen Dawson, president of the College Republicans, said he believes Romney to be the most competent candidate in the upcoming election because of his experience in the executive and political world. As governor of Massachusetts, Dawson said, Romney balanced the state’s extremely disorderly budget as well as stabilizing its economy.

“Those things were a catastrophe,” Dawson said. “They were considering canceling and having another country take over because we just couldn’t handle it. He turned it around and made millions of dollars for Utah and local businesses.”

Bryan Staul, president of the KSU College Democrats, said that under a Romney administration students would see drastic cuts to their Pell Grants and a repeal of the Affordable Care Act, which allows individuals to remain on their parent’s health care plan until age 26.

“In my opinion Mitt Romney is one of the weakest presidential candidates in modern presidential history,” Staul said. “To put it bluntly, this is the worst national ticket for students.”

Dawson said that though many students tend to lean toward the Democratic Party, they should consider what their lives — or their children’s lives — will look like if America continues to accumulate debt.

“Students’ biggest fear shouldn’t be what’s going to happen in 10 or 20 years when their student loans are due,” Dawson said. “It should be in 30 years when they have families and kids of their own and they look out and say ‘our dollar is now worth 20 cents compared to what it used to be.”

Erik Heidmann, assistant political science professor, says that he believes Romney is going to struggle with courting student voters because he seems “detached” from the experiences of ordinary students.

“He’s not really trying to sell himself to students,” Heidmann said. “He may be making a crude calculation that students aren’t going to vote for him anyway. They have a notoriously low turnout rate. [The election in] 2008 was just the exception and it was only a little better than 2004 when John Kerry was at the top of the ticket, but it certainly doesn’t seem like he’s courting that particular block of voters.”

Dawson, however, believes that the Republican Party is evolving in ways that should be appealing to youth voters.

“I think we’re starting to move away from the older generation, that old stereotype that the Republican Party is your father’s or grandfather’s old, white, male party,” he said.