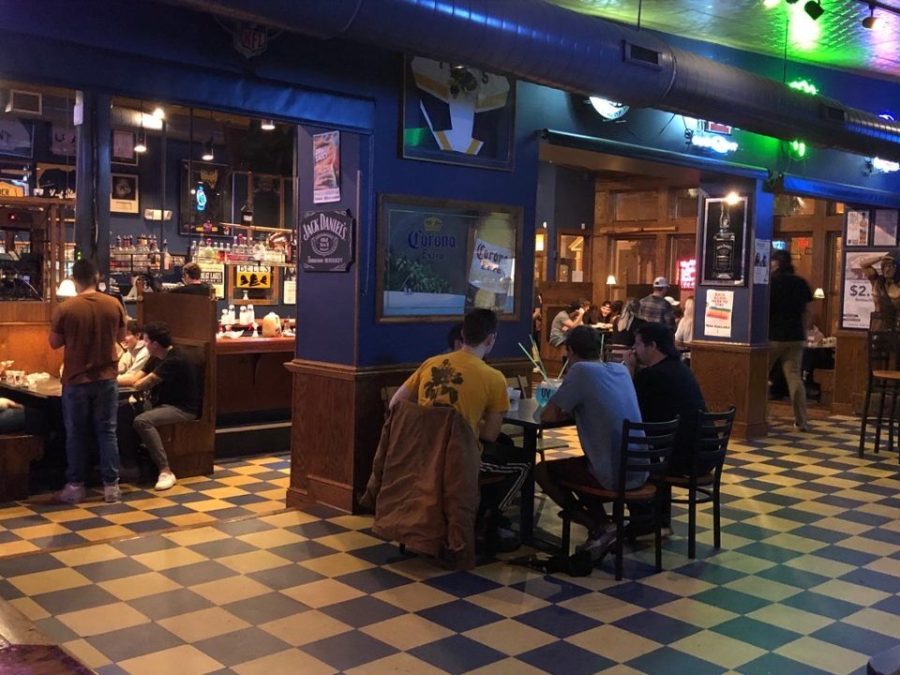 Customers at Water Street Tavern drinking at one of the designated tables as part of the social distancing protocol on Friday, Oct. 23, 2020.

The streets of downtown Kent will be unusually quiet this Halloween season as bars and pubs throughout the city are dealing with major financial losses due to Portage County remaining in Level Three risk for COVID-19 spread.

Lt. Mike Lewis of the Kent Police Department issued a press release on Friday, asking people not to visit Kent this year in an effort to reduce the spread of the virus.

“While we empathize with our downtown bars and restaurants in their economic struggles due to COVID-19, we must also acknowledge the potential health consequences of large gatherings,” Lewis said.

In a normal autumn, nearly every downtown establishment would plan a large Halloween celebration weeks or months in advance. The State of Ohio mandate prohibiting bars from serving alcohol past 10 p.m. has forced bars to cancel those plans, and give up many profits in the process.

“We’d have someone selling shots, a beer tub, lots of bartenders, we’d come up with a group costume,” Mike Beder, owner of Water Street Tavern in Kent, said. “We’re not really doing any of that this year.”

Although he insists that demand for entering the tavern isn’t much lower, reduced capacity has narrowed his profit opportunities. Beder also estimates that Halloween is the second-most lucrative day only to St. Patrick’s Day in Kent.

“Normally we’re three or four people deep at the bar, but we can’t serve people like that anymore,” Beder said. “Our problem hasn’t been not enough volume of customers wanting to come; it’s not having enough space to safely serve all of them.”

Because patrons can only drink at socially distanced tables, Water Street Tavern’s revenues have taken a large hit.

“If we did 20% of what we did last year, I’d be astounded,” he said. “I don’t think any industry has been hit as hard as bars and nightclubs.”

The sustained decline in revenue is a state-wide trend as well. Tom Wilke, economic development director for the City of Kent, explained the importance of the annual “Kent Halloween” to the city’s economy as a whole.

“The state mandate has had a devastating impact on any establishment that relies heavily on alcohol sales,” he said. “I’ve heard that [Halloween] makes up for as much as 10 weeks of total sales oftentimes.”

Wilke is grateful that Kent has only had two permanent business closures in general: Peace, Love and Little Donuts and Gracylane. However, he remains concerned about its nightlife industry moving forward, especially as winter approaches.

“With the coming of cold weather with no outdoor seating, it’d be hard to imagine us not having a few establishments close permanently,” Wilke said.

101 Bottles of Beer on the Wall, located on 115 North Willow St. in Kent, has been more fortunate. Due to offering retail products on top of restaurant-style seating, the bar has adjusted smoothly to changing circumstances.

“We were actually pretty lucky when the bars shut down, because we still had revenue the whole time,” Dave Hoopes, manager at 101 Bottles of Beer on the Wall, said. “We had the opportunity to expand our seating, and we added in a bunch of booths to spread people out.”

Hoopes is still hoping that Halloween will be a successful night compared to others this year, but cautions that their 2020 figures are still far from usual for the bar.

“If we get a nice bump from next week that’d be great, it’s just not comparable business,” Hoopes said. “The concept of throwing a party for Halloween is just not something compatible while keeping within the safety guidelines.”

The drop-off in capacity for places like Water Street Tavern is more severe.  Beder estimates around 300 people come into the building every Halloween.  Now, they’ll have to make due with only 70 people, between filling the lower-level bar and main floor.

“We hit that capacity with regularity; we’ve already kind of maxed out at that point,” Beder said. “I don’t foresee a huge uptick.”

In the meantime, bar owners will have their eyes on the Ohio Senate during the next two weeks. Lawmakers introduced Senate Bill 374 on Oct. 15, which would repeal Gov. Mike DeWine’s executive order forcing establishments to stop selling liquor at 10 p.m.

Mason Lawlor covers the City of Kent. Contact him at [email protected]