Softball looks to stay on top 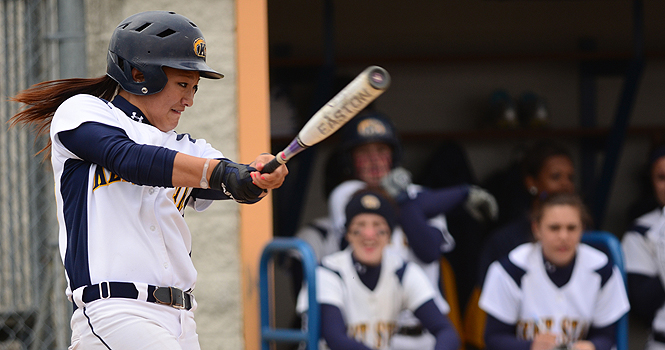 Lauren Grimes, junior outfielder, swings the bat during a doubleheader against Central Michigan on March 30. The Flashes beat the Chippewas 5-2 in game one and 3-2 in game two. Photo by Nancy Urchak.

The Kent State Softball team ended their 10-game home stand with the respectable record of 7-3, putting them tied for first place in the Mid-American Conference (6-2) and an overall record of 20-18.

Last weekend, The Flashes split a two-game series between Bowling Green and finished the weekend defeating Toledo twice, ending with a 3-1 record.

“In this conference, there will be a fight every weekend,” Flashes coach Karen Linder said. “To go 3-1 on a conference weekend is a pretty good result.”

Against Bowling Green and Toledo, The Flashes collected a total of 27 hits, scoring 15 runs and committing eight errors.

“I think our pitchers did a pretty good job,” Linder said. “At times defensively we looked very good. One game we threw two runners out at the plate. We played solid defense the entire weekend. Offensively we showed some power. The biggest thing for us is that we just have to be more consistent with all phases of the game.”

Kent State will travel to Western Michigan to play the Broncos in a doubleheader Friday.

Western Michigan is 4-2 in conference play this year with a overall record of 18-12.

The Flashes and Broncos have played a total of 71 games. Kent State holds the winning record, 40-31.

“Western Michigan is very much like us,” Linder said. “They have solid pitching, they have kids who can hit for power, they have a lot of upperclassmen and they play with a lot of passion and enthusiasm. They are one of those teams where their energy is always a factor.”

The Broncos are on a three-game hot streak, defeating Eastern Michigan twice and No. 20 Michigan. After their quick matchup against Western Michigan, The Flashes will travel to Northern Illinois to play the Huskies.

The Flashes have played Northern Illinois 40 times in the school’s history, with a losing record of 18-22.

In their last four games, Northern Illinois went 3-1 defeating Eastern Michigan and Central Michigan twice and losing to DePaul. The Huskies collected a total of 34 hits in the four games, scoring 14 runs and only committing five errors.

“Northern Illinois is a very young team,” Linder said. “Northern Illinois relies on two young freshmen, so again, they are a younger team. They are a little bit more up and down. They will use the short game to manufacture runs, though the top of their lineup has some power. [Overall] they are very inconsistent in what they do offensively and defensively.”

To stay tied [or take the lead] for first place in the eastern division in the MAC, they need to play successful softball and hope that the other first place teams [Miami and Bowling Green] slip in their weekend games.