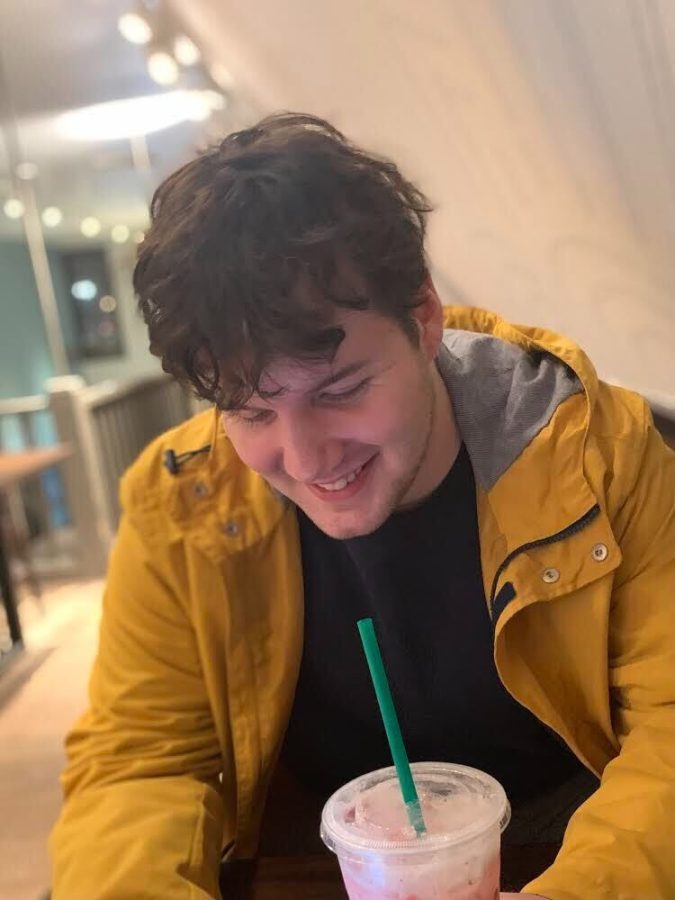 Isaac Halaszi, a sophomore at Kent State, spent two weeks indoors with no face-to-face contact with others (besides random hallway happenings) and no physical connection with the outside world. This wasn’t an everyday occurrence for Halaszi — this was quarantine.

“I went a whole two days without seeing anyone,” he said.

Halaszi, a double major in peace and conflict studies and Spanish with a minor in pre-law, lives in Eastway Hall on Kent campus. This is one of eight dorms where a resident contracted coronavirus.

“There’s wings in Eastway,” Halaszi said. “And if two people in a wing test positive, then everyone in that wing goes into quarantine and has to get tested.”

When Halaszi learned he was required to quarantine, he was the first on his floor to get tested.

“I got tested on the first day and then it came back negative a couple days later,” he said. “So the whole time, I knew I wasn’t sick…and it just felt even worse.”

According to Halaszi’s first-hand experience, the COVID-19 testing on campus was fairly straightforward.

“The Health Center [will] call and set up an appointment and then you do it [get tested] in a little trailer that’s in a parking lot,” he said. “We put the cotton swab in our own nose and then they just stood in the doorway and counted.”

Regarding testing, Halaszi said that “it didn’t hurt as bad as the internet led me to believe, but it was a weird experience.”

Overall, he was in and out in just 10 minutes and then his quarantine began.

Halaszi decided to quarantine on campus despite living near the Kent area. He stayed on his floor from Sept. 24 through Oct. 7.

“I had the option to go home,” he said. “I’m an SSL and I figured I’ll just go through this so if my students end up having to do it, I can answer their questions. So I’m leading by example, basically. That’s why I did it.”

As an SSL, or Student Success Leader, Halaszi helps teach freshmen in an FYE, or First Year Experience, course.

“I’ve had a lot of students email me [with questions about quarantine] already,” he said.

“I’m part of a lot of things,” he said. “I have meetings all the time…that was my social contact. That’s how I saw people, so I was invested in those.”

In terms of food, Halaszi said the university provided three meals a day.

“When you went to do testing, you filled out a form about dietary restrictions, so you could get vegetarian options,” he said. “I just got the regular meals, so whatever was delivered. There was always fruit servings and salad, so all of our needs were being met.”

All of the meals came from Eastway Center on campus.

At the start of quarantine, Halaszi was genuinely enjoying himself. But, as time went on, being separated from the rest of the world took a toll on his mental health.

“The first week, I was handling it really well…and then, I don’t even know what happened, but the second week hit and I was just zoning out and just laying there,” he said. “I laid under my bed for an hour in the dark for no reason and I was just staring at the ceiling…”

Because of his experience, Halaszi stresses the importance of Kent State’s mental health services.

“There’s always this stigma around mental health, and even me, I’ve fallen suit to that,” he said. “But you gotta know, there’s always people there to talk to.”

Being without caffeine, social contact and even work were some of the main factors that negatively impacted Halaszi’s mental wellbeing.

“I honestly missed working,” he said. “Not even for the money or anything, just my coworkers. They’re good to be around and that’s what I missed most…”

Halaszi is a Starbucks barista off campus. “Being a barista is really hands on,” he said. “And that’s what I like.”

He said if he had to pick a favorite part of the quarantine experience, it would be finding time to self-reflect.

“I guess it was a break from everything,” he said. “Honestly, I still had classes and I still had meetings, but I feel like I had more time for myself because I wasn’t working, I wasn’t going out with friends. I had more time to meditate and think about things. Like, I actually took my assignments and thought about them more.”

Through the ups and downs of quarantine, Halaszi knew he’d eventually be able to re-enter reality. When that moment came, he reflected on what a strange feeling it was.

“The first time I walked out of my dorm, it just felt so surreal,” he said. “It felt weird seeing people. I was like, “‘The world’s still going.’”

Now being out of isolation for a few weeks, Halaszi gives advice to those who might have to go through the same experience he did.

“Take advantage of counseling and psychiatric services we have here,” he said. “If you end up crashing a week in…definitely reach out to someone, because everyone’s here to help you at this point in time.”

Halaszi also stressed the importance of messaging others while being alone.

“Make sure you keep in contact with your friends,” he said. “You may not be seeing each other, but a phone call or something, or just texting…that definitely helped me.”

“It hasn’t been that bad,” Shields said whilst still in isolation.

On Thursday, Oct. 8, he received the email that many students have come to dread. Someone in his hallway had COVID-19.

Upon first hearing the news, Shields said, “Everybody was freaking out.”

However, Shields himself didn’t seem too concerned with the information, especially considering this was his third time being told to self-quarantine.

In March, Shields quarantined for the first time. Then in August, he quarantined a second time as per the rules of being an athlete on campus.

Six days after being tested, his results came back negative.

“It wasn’t bad,” Shields said, regarding the COVID-19 test. “It made me feel really congested. It just felt really weird.”

As a native of Florida, Shields decided it was best to stay in Kent to quarantine. If he were to go home, he’d have to be isolated in his house and then again when returning to Ohio, per COVID-19 travel recommendations.

While his roommate decided to quarantine at home, Shields was prepared to spend the next two weeks alone. Similar to Halaszi, he soon felt bouts of loneliness.

“Sometimes I’ll just leave my door open…to talk to anyone,” he said. “Netflix has been my best friend.”

Despite the increased amount of free time for Netflix and naps, Shields also had to focus on his courses.

“I have had a lot more free time,” he said while in isolation. “Especially since I can’t go anywhere.”

Per Kent State’s strict COVID-19 guidelines, Shields was not permitted to leave the third floor of his residence hall until his two weeks had come to an end.

“We can do laundry, throw trash away and use the bathroom,” Shields said.

When he wasn’t hanging around in his room or in the hallway, Shields was often making it a point to keep in contact with his family.

While in isolation, Shields said what he missed most about the world outside was, “Going out to places and getting food. I miss Cane’s so much right now.”

As a self-proclaimed introvert-extrovert, Shields was certainly ready to get back outside after two weeks indoors and on Thursday, Oct. 22, he was finally out of quarantine.

With his personal experience as a guide, Shields suggested that other isolated students, “Get a lot of snacks, make sure you get your Netflix account right and make sure to get in contact with people, because it gets very lonely.”

Paige Chadwell, on the other hand, had a more unique experience.

“The headache was probably the worst part,” Chadwell said. “It just wouldn’t go away.”

For four days straight, Chadwell dealt with a pounding headache and an overwhelming sense of anxiety.

The day she started feeling sick, she made it a point to self-quarantine in her apartment. This lasted from Sept. 19 through 24.

“I just kinda stayed in my room for the time that I didn’t feel good,” she said. “If I was positive, I didn’t want to be around my roommates.”

During self-quarantine, one of Chadwell’s biggest concerns was making sure she’d have enough food to make it through.

Normally, she’d go grocery shopping with her two roommates, but she didn’t want to risk being in public and potentially spreading her sickness to others.

Additionally, Chadwell struggled more with focusing on school work. Typically, she’d leave her apartment to go to the library or Starbucks to study, but in quarantine, she didn’t have these options.

Chadwell said it was nice not having any plans or places to be for a couple of days, but eventually her symptoms worsened to the point where she said she couldn’t get out of bed.

Six days after developing symptoms, Chadwell went to the DeWeese Health Center on campus to get tested for coronavirus.

“Because I work on campus,” she said, “they were gonna make me get tested anyway.”

One of Chadwell’s co-workers previously tested positive for COVID-19, and considering Chadwell’s symptoms, she knew she’d have to be tested sooner or later.

Working as a Subway employee in the Hub, Chadwell explained her situation to her managers. Without question, they allowed her to take a week off of work for precautionary measures.

“I just didn’t feel like myself completely,” Chadwell said. “I was overwhelmed by everything, just thinking how it would affect other people if I did test positive.”

Two days after getting tested, Chadwell breathed a sigh of relief upon receiving negative test results and soon she started feeling better again and was able to end her self-isolation.

“People don’t realize how serious [COVID-19] is until they’re forced to do something like that [quarantine],” Halaszi said. “I hope it’s not something everyone has to go through. If it happens to me again, I’m going home this time.”

Morgan McGrath is a feature writer. Contact her at [email protected]