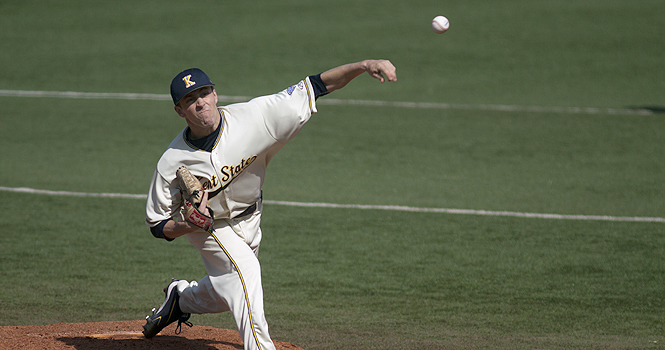 Sophomore pitcher Michael Clark pitches to a Toledo Rocket player during the game on Tuesday. The Flashes lost to the Rockets in extra innings 4-3. Photo by Coty Giannelli.

The baseball team’s quest for a championship is off to a great start after the Flashes swept Ball State in a three-game weekend series, their second conference sweep of the season.

Coach Scott Stricklin said the games on Friday and Saturday against the Cardinals were a little too close for comfort, but he said his team fought hard to win both.

“If you’re going to win a championship, you’re going to have some tough games,” Stricklin said. “We found a way to win, and we’re happy to be coming home to Kent with a sweep.”

After beating out Northern Illinois last weekend, the 14-12 Flashes took first place in the Mid-American Conference standings with a perfect 6-0 record.

Senior catcher David Lyon came through yet again for the Flashes to bring them out on top of Ball State in the series opener.

Lyon blasted a three-run homerun with two outs in the top of the tenth inning to break the deadlock between the two teams. The homerun was Lyon’s third of the year.

Stricklin said Lyon is without a doubt the most clutch hitter in the history of Kent State baseball.

“He’s had more game-winning hits than anyone who’s ever been through here,” Stricklin said. “He continues to do it, and when he came up to the plate in the 10th, I had a pretty good feeling he’d do it again.”

Casey Wilson, junior right-hand pitcher, earned the win for the Flashes after working his way out of a jam in the bottom of the ninth inning. Wilson came into the game with the bases loaded and only one out. With the game tied at four, Wilson earned a force-out at home plate and a strikeout to send the game into extra innings.

Sticklin said he was pleased with the way Wilson performed in a sticky situation.

“That’s the best I’ve seen Casey pitch since he’s been here,” Stricklin said. “His command was there, and [third baseman] Sawyer Polen made a nice play to get the guy out at the plate.”

Wilson breezed through the bottom of the tenth to seal the win for the Flashes.

Flashes’ freshman left-handed pitcher Brian Clark came in to pitch the bottom of the tenth inning and faced the same situation Wilson faced the day before. With bases loaded and one out, Clark and the Flashes turned a failed squeeze plate by Ball State into an out at the plate. Clark then forced a groundout to get out of the jam.

“We have a lot of faith in Brian,” Stricklin said. “It’s great to see a freshman come into that situation and do well. He’s really good, and he’s only going to get better.”

Kent State took the lead in the top of the eleventh inning on an RBI single by sophomore second baseman Derek Toadvine. Junior center fielder Evan Campbell extended the Flashes’ lead with a sacrifice fly.

Stricklin said he was impressed with the way the team competed under adverse conditions.

“We had some tough situations we had to overcome,” Stricklin said. “In the end, we came through with a really good team win.”

Junior right-handed pitcher Ryan Bores started the game and had another impressive outing for the Flashes, pitching nine innings, allowing two runs on nine hits and tallying eight strikeouts. Ball State tied the game in the ninth inning with a solo home run, and Bores ended the day with a no-decision.

“Bores deserved to win the game,” Stricklin said. “He was really dominant throughout the game and just unfortunately made one bad pitch in the ninth.”

After winning the first two games by close margins, The Flashes’ offense exploded for their best offense outing of the year to complete the weekend sweep.

“Offensively, it was a great day to hit,” Stricklin said. “We felt like we could really break out and score some runs today, and we did a good job.”

Ryder continued his strong weekend, hitting his third home run of the series on a three-run shot in the fourth inning. Ryder finished 3-for-3 and led the Flashes with five RBIs.

“He hit just about everything hard,” Stricklin said. “I knew it was only a matter of time before he’d start hitting some out of the park.”

The game was never close, as the Flashes jumped ahead to a 10-0 lead after three innings. Campbell smashed a three-run homerun in the third inning, and freshman designated hitter Tommy Monnot capped off the six-run inning with a two-run double.

The Flashes’ next matchup is at home against Penn State. First pitch between the Flashes and the Nittany Lions is scheduled for 3 p.m.