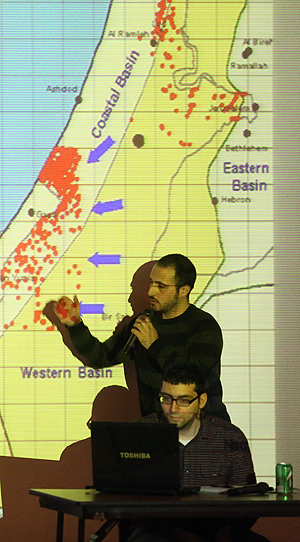 Nidal Atallah and Ghassan Rafeddie speak to students in the KIVA on Tuesday, during their "Ask A Paleistinian" presentation. Attalh and Rafeddie want to bring the "Palenstinian perspective to Kent State." Photo by Coty Giannelli.

In honor of International Palestinian Political Prisoners Solidarity Day, Kent Books to Prisoners hosted “Ask A Palestinian” Tuesday night in an attempt to provide clarification of global conflicts related to Palestine and its citizens.

Dozens of students filled the Kiva to ask a Palestinian native and an American-born Palestinian panelist questions pertaining to the Israeli occupation, Palestinian culture, America’s policy on the Israeli-Palestinian conflict, the Gaza Strip and Holy wars.

The evening was preceded by a PowerPoint titled “Israeli water policies causing adverse effects on the Palestinian population and environmental resources, by Nidal Atallah.”

Atallah, a native of Palestine and graduate student and geology major at Kent State, focused his presentation entirely on the lack of water supply in Palestine as a result of the Israeli occupation.

“One of the many things that happened after the occupation was that a lot of water wells were confiscated,” Atallah said. “I’m talking about water wells that produce enough water for communities; tens of wells were confiscated, and now there is a quota on how many they can use. The situation that started happening was that Palestinian wells started drying out, though Israel created new wells.”

Numerous students asked questions, many of which were controversial and caused heated debate.

Panelist Ghassan Rafeedie, a graduate student and anthropology major, spoke about the occupation.

“There have been attacks on Israel that the general population of Palestine don’t believe in, but this does not justify the destruction of an entire population,” Rafeedie responded. “We cannot say that the entire Israeli population as a whole is encouraging attacks on Palestine, and you can’t say that about Palestinians either.”

“Why doesn’t the United States government step in if this is such a human rights issue?” another student asked.

“Once World War II ended, the U.S. wanted to use some country as a method of gaining ground in the Middle East. Israel has always been a welfare state, reliant on the U.S,” Rafeedie said. “We give them tens of billions of dollars a year. So you have Israel who is helpful for the U.S. because it’s convenient to be everywhere in the world. Frankly, Americans don’t care enough to say ‘stop doing it.’”

“What types of rights do Palestinians want?” a third student asked.

“I want the right to vote for a leader who can competently lead Palestine,” Rafeedie said. “There is an unequal distribution of resources and leaders…but if this power struggle continues, nothing is going to be solved.”

Mike Lucas, a member of Kent Books To Prisoners and organizer of the event, said that the release of a Palestinian political prisoner after 66 days of hunger striking for his release aided in the decision to host the event on April 17.

“Israel had him under administrative detention without any charges pressed,” Lucas said. “He wanted either to have charges pressed against him or to be released.”

Rafeedie said he decided to participate as a panelist because he feels that it’s rare in our culture to hear the Palestinian perspective on critical topics directly related to Palestine.

“I’m sick of seeing Palestinians shut out of the discussion,” Rafeedie said. “This happens especially frequently in the mainstream media. NPR, CNN, Fox News, NBC and others are constantly bringing on Americans and Israelis to discuss the situation in Palestine. Instead of sitting back and being frustrated with this, I’d rather get out there and do something beneficial for both Palestine and the Kent community.”

Rafeedie said that this event is necessary because many Americans do not understand what it means to live in a foreign-occupied country.

“Unless you’ve been there, it’s nearly impossible to understand the occupation,” he said. “Americans typically have a hard time grasping the concept of being permanently occupied by a foreign country. After all, when was the last time that happened to the U.S.?”

Atallah said that he decided to be a panelist because so much of his upbringing has been affected by the conflict with Israel.

“I feel like a lot of my childhood and early adult life were consumed by the realities of the occupation and the Palestinian-Israeli conflict overall,” Atallah said. “This is not unusual for Palestinian kids growing up in east Jerusalem, the West Bank or Gaza, or within Israel for that matter, who encounter the occupation on a daily basis. Having to go through Israeli military checkpoints, unexpected curfews and many other forms of oppression.”

Atallah, similar to his fellow panelists, believes that his perspective has been under-represented in American culture.

“I want the Kent community to hear our voices as Palestinians,” he said. “ I believe that the values we are addressing are global and will resonate well with Kent Staters.”

Lucas, however, has more commodious intentions that he hopes will broaden the conversation about prisoners as a whole.

“We want to educate the public on issues of political prisoners here in the U.S. and abroad as well as the tyrannical nature of the American Prison Industrial Complex, racism in the prison system, and much more.”

Books To Prisoners is a nonprofit organization based in Seattle that sends books to prisoners in the United States. Their goal is to open minds and change the lives of those who may or may not have a second chance at freedom. According to their website, they “hope to foster a love of reading and encourage the pursuit of knowledge and self-improvement.”