Behind the scenes of bringing big names to KSU 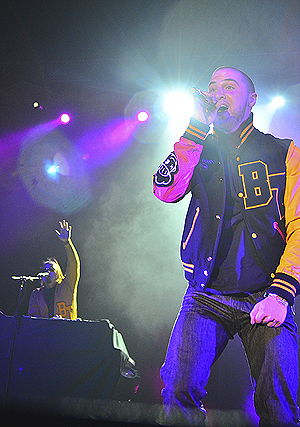 Mike Posner performed at the M.A.C. Center on September 17. Photo by Jacob Byk.

Students might imagine planning a show is as simple as flipping through a catalogue of performing artists. In reality, lengthy negotiations between the university and the artist’s agent begin as early as five to six months in advance.

Donna Carlton, assistant director for the Center of Student Involvement, said she works with the students of the USG Programming Board, who do much of the initial planning themselves.

“The students all have their own little specialities,” Carlton said. “[They] do a lot of upfront research on who’s touring and what’s out there.”

Jeff Hammond, former USG Programming director, said he handles the artist research and delegates tasks to a board of five other students.

“I’ll have my ear out there trying to listen for who’s getting hot, who people want to see,” Hammond said. “Then I’ll have my board go out and kind of get some feelers, and they’ll ask the students: ‘Hey, what do you think of this band? Would you see this band?’”

Weighing student opinion, university expenses and close competitors, Hammond then identifies a handful artists and sends out written offers to their agents. Carlton said a lot of offers aren’t returned because of very limited dates and less than ideal venues.

“Sometimes we will say we’re looking for a Thursday or Friday on Sept. 12 and 13, and then it will come back — well, they’re only available on the 10th,” Carlton said. “So there’s so much that goes back and forth between the agent and our office in trying to book any of these acts.”

From the proposal until the show, Carlton said, the university communicates only through the agent, never the artist. Sometimes, agents contact her if an artist is passing through.

“I would consider Kent State has a good reputation for artists in how we treat the artist, how we work here,” she said. “At times, I will have agents call and say we have this artist coming through. We’re looking to book it.”

It’s cheap and easy to book artists already on tour, she said, because typically they come for reduced rates as opposed to a onetime fly-in date.

Regardless of the scenario, contract negotiations come through Carlton. After she reviews and signs them, the Center for Student Involvement, Office of General Counsel follows suit.

The agent then decides to market the show, which is dictated once again by the artist’s agent.

“I don’t do anything without specific clearance from the agent,” Carlton said. “We maybe will know that we’re doing it, but when things aren’t set up yet, and the agent hasn’t allowed us to release [the name of the performer], I can’t do anything about it. Our hands are very tied in that situation.

Carlton said the show’s marketing is a different strategy than that of larger venues like the House of Blues. Kent State’s artist contracts are generally a flat offer not based on ticket sales.

“Universities are very different, generally, because we don’t make money on these shows,” she said. “We’re lucky if we break even.”

Last weekend’s FlashFest was free only because the university had money left over from previous shows.

And just because students buy tickets for a band doesn’t guarantee they’ll see them. Until the day of the show, Carlton said “there’s a withdrawl clause for everything,” citing the Eli Young Band, a Dierks Bently supporting act who backed out of its Nov. 3 show.

“He was very popular and students were very sad when he canceled,” she said. “I never get a reason. It’s a one-line thing, usually. It’s all legal. It’s all business. I know many students think we have a lot more control over this stuff.”

Carlton said it’s pretty normal for artists to request dressing room items such as food, drinks and a certain setup to make their stay comfortable.

“[The artist] is on a bus generally traveling for weeks, sometimes months, at a time,” she said. “These are their comfort things that they need sometimes just as they come through. If we can’t provide it, it’s not a deal breaker.”

Some of the artists’ requests are intended to accompany their performance, such as T-shirts to throw into the crowd or — Carlton’s oddest request — an expensive, obscure teddy bear for Mike Posner to give to a girl on stage.

One thing that is always crossed off? Tobacco and alcohol. As a state university, Kent State cannot provide it.

“Generally, I’ve never been questioned,” Carlton said, referring to the few denials she has made during negotiations. “It’s just part of the business.”