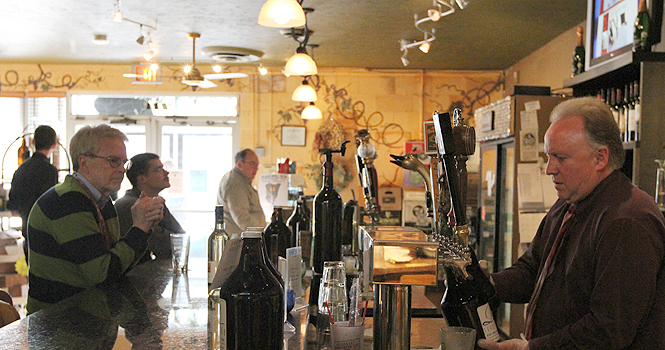 Owner Robert Morson fills a growler for a customer behind the bar of Riverside Wine, April 13. Photo by Chelsae Ketchum.

The sounds of soft jazz and clinking glasses flow in the background as laughing customers thumb through their menus. Waiters bustle between tables, uncorking bottles and serving platters of fruit and cheese. On the outside it looks like just another liquor store, but after entering Riverside, customers know it’s unlike anything else in Kent.

Since he converted the bar from Sammy’s Food Mart nearly two decades ago, owner Bob Morson has developed Riverside Wine and Imports into one of the area’s best getaways for wine and beer enthusiasts. Located along North Mantua Street, Riverside offers a level of sophistication not often seen in Kent. Morson furnished the homey interior with a granite bar, wooden tables and chairs and murals of Italian vineyards along the walls.

Morson said his interest in viticulture started in 1984 when he took his first wine class and continued to grow until he bought the roadside convenience store in 1996 and began reshaping it into an upscale beer and wine bar. Now Riverside features the most extensive wine selection in the area.

“We advertise approximately 1,800 different wines,” Morson said. “We have a large selection of Ohio wines, and we’re known for having wines from all over the world.”

Aisles of wine fill most of the store, with customer seating available in the back. The limited amount of seating provides a cozy atmosphere and gives customers the feeling of sitting around a dinner table rather than a wine bar.

Riverside also features one of the largest selections of beer locally, with over 350 to choose from. Morson said the majority of the beer offered is craft and import beer. Many craft beers are also available on tap at the bar.

Zachary Sarcyk, senior physical education major, said he usually goes to Riverside once every week or two. He said he always keeps up with the new beers they have on tap and what they’ve added to the wine selection.

Sarcyk said his favorite features about the bar are the customer service and the murals of vineyards along the back walls. He also enjoys the back patio when the weather is warm. He said many customers don’t even notice the back deck because it is hidden from the exterior.

“The back deck opened in May 2007 and seats about 150 people,” Morson said. “It has a great view of the river and is right near the bike trail. We’re getting a lot of people who are riding the bike trail and then coming over here for a glass of wine or beer or a cheese plate.”

Sarcyk said he first came to Riverside when he took the Wines of Northeast Ohio class last year. He said the class gave him a deeper appreciation for wine and how it’s made.

“Each bottle of wine’s different,” Sarcyk said. “That’s the great thing about wine, it’s not all the same. With beer or liquor it’ll taste the same every time you have it, but with wine you have to factor in the climate of the year, where it was grown, rainfall and so on. It all influences the molecular structure of the grape, its fermentation and eventually its taste.”

Loudon said he keeps going back to Riverside because of the mature, relaxed atmosphere and friendly customer service. He also said they are more hospitable when it comes to drinking.

“At Riverside they let you take wine from the store and let you drink it in the store,” Loudon said. “You can get a bottle of wine there and if you don’t drink it all you can take it home with you.”

Morson said he doesn’t plan on opening another store anytime soon. Instead, he plans on continuing to improve Riverside and add more features.

“I’d like to add a little more diversity to our menu,” Morson said. “Like having a few hot dishes, possibly flatbread pizzas. Also, I’m seriously considering closing in a large portion of the deck so we can use the deck in all four seasons.”