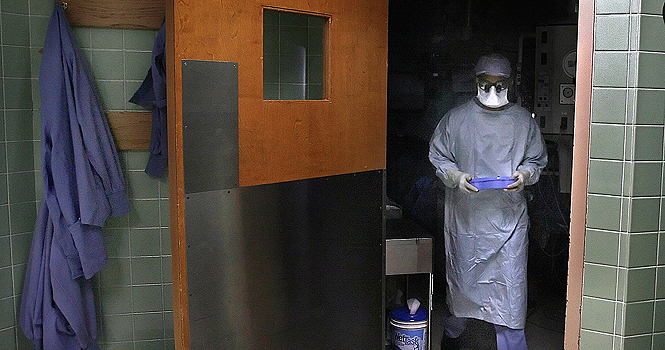 Dr. Raja Kandaswamy carefully carries a kidney that had just been removed from a living donor in one operating room to a recipient who was waiting to receive the organ in an adjacent operating room at the University of Minnesota Medical Center in Minneapolis, Aug. 14, 2009. Photo courtesy of Jim Gehrz/Minneapolis Star Tribune/MCT.

Arami Kerkian’s father was diagnosis with liver disease about six years ago.

Kerkian, senior business management major, said her father needed a liver transplant and was immediately put on the waiting list. For about four agonizing months before he got the call that they found a match.

“It was a battle every day wondering what was going to happen the next day,” she said. “He always told me that if he’s not worried about it, I shouldn’t be worried about it. He was very optimistic, so that helped me a lot dealing with it.”

Kerkian’s father is one of thousands of people who are placed on the waiting list each year.

Sonia Alemagno, dean of the College of Public Health, said there are approximately 18 people who die each day because they did not have an organ available for transplant.

According to the Donate Life American organization more than 100,000 men, women and children are currently waiting for organs, and every 10 minutes there is another name added on the waiting list.

Alemagno said main organs are not the only organs that can be used.

“The most needed organs are the kidneys, pancreas, liver, lungs, and heart,” she said. “However, you can get other organs, eyes and different types of tissues as well.”

James Elliot, senior nursing major, said he donated stem cells of the bone marrow in the summer of 2010.

He said when they first took his DNA in the military for identification purposes, they asked him if he wanted to become a bone marrow donor. He accepted.

“For five to six days I had to take medication,” he said. “It causes your bone marrow to reproduce stem cells, which are the beginning stages of bone marrow. They then hook you up to a dialysis machine and it filters out the stem cells and returns your blood.”

He said the woman who he was donating to was struggling with cancer at the time and was also going through chemotherapy.

“As soon as you start the procedure, they tell you that you can back out at anytime,” he said. “But if you do, she’s probably going to die. So it’s sort of like once you start, you’re obligated to this person.”

Elliot said he never even met the woman to whom he donated the bone marrow.

“I just knew that she had a kid,” he said. “She actually passed away in October, so it was like a year and four months after the transfusion. I just tried sending a letter to the family and I have been putting it off because I kind of felt guilty even though I know that it wasn’t much more I could have done.”

He said she was doing well for about a year after the transfusion but doesn’t know whether her cancer came back or if her body rejected the bone marrow.

Elliot said he doesn’t regret the procedure because he always thinks about other people’s needs before himself.

“So when someone needed my bone borrow, the benefits of helping someone else outweighed my risks of going through the procedure,” he said. “Just like blood, bone marrow is something that is going to reproduce back in your body anyway. I don’t see the benefit of not sharing your bone marrow if it has the potential to save someone’s life.”

Kerkian said her father started having health problems about eight years ago. She said the doctors thought it might have been pneumonia or the flu at first until they performed further tests and figured out that it was his liver.

“They didn’t know what the cause of the disease was,” she said. “My aunt also had liver issues, so it probably was a genetic thing.”

She said when he was on the waiting list, he had to get blood transfusions and take medication. When he finally got the call that they had a liver match four months later, he immediately went into surgery.

“He was really out of it for a while,” she said. “He seemed very confused, and he would call us on our cell phones and say weird things that we didn’t know what he was talking about.”

Kerkian said her father’s body started to reject the liver and they had to put him back on the waiting list again for another liver transplant.

She said they do not know who the donor was but her and her family are very thankful.

“It was the selflessness of one person that saved my father’s life,” she said. “It was a big chunk of his life and our lives that we missed out on. But now I’m thankful that everything worked out ok because it could have been a lot worse and we’re lucky that he’s still alive today.”