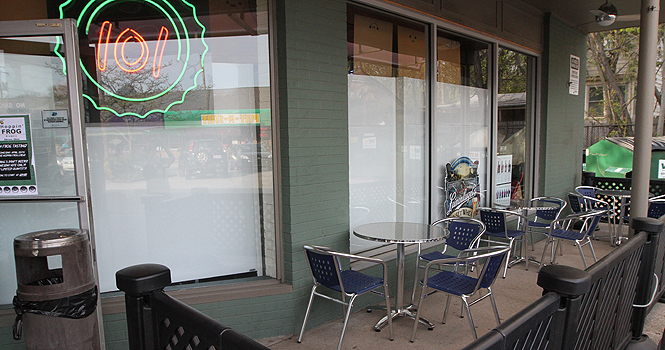 Coming soon to 101 Bottles the bar will also have outdoor seating, April 15. Photo by Chelsae Ketchum.

Since last semester, only one corner of the store has changed – but it feels like a whole new place.

Enormous aisles of alcohol no longer confront customers entering 101 Bottles of Beer on the Wall. Instead, a granite countertop surrounded by bar stools welcomes the familiar crowd. Even the 24 tap handles sprouting from behind the bar look like they’re waving ‘hello.’

Located on North Willow Street, 101 Bottles allows the customer to choose from over 700 different beers — one of the largest selections in the state. They also advertise approximately 1,500 different wines.

Travis Sessions, manager of 101 Bottles, said adding the bar was just the next logical progression. He said there are a lot of beers that are only offered in keg form, and they wanted to make them available to customers.

“We’ve always been the place to go for craft beer,” Sessions said. “Now we see a lot of our previous customers coming in, sitting down and enjoying a beer.”

General Manager Craig Contini said the new outdoor patio in front of the store can seat approximately 30 customers. He built the patio because he thought the area outside the store would be perfect for customers to enjoy the outdoors. The patio will open once the weather becomes warm.

“The outside area will be nice because not many bars here have outdoor areas,” said Stephanie Parish, a master’s student in teaching and social studies. “As an undergrad, I liked the Brewhouse and Water Street, but now that I’m a little older, I just wanted to sit down and have a beer. This is one of the better places to go for that.”

Contini said the bar has been doing very well since its construction four months ago. It features 24 beers on tap, and changes selections every week or so.

“Our niche is in craft beer,” Contini said. “It was a lot of work to rearrange the store to make everything fit, but in the end it was all worth it. The town’s basically a beneficiary of that — being able to sample craft beer in a large scale. Out of 700 different beers, we try to showcase 24 of the best ones every week.”

Contini explained the store is at a slight disadvantage because the university creates a lot of customer turnover. He said usually by the time students expand their palates and begin drinking craft beer and wine, they graduate and leave. Then less experienced students begin the cycle again by drinking more generic beer and then narrowing down their tastes. He said this provides less of an opportunity for students to really discover the craft beers they could enjoy.

Dan Smith, a medical student at Northeast Ohio Medical University, said he enjoys going to 101 Bottles and prefers it to other bars downtown because of the expansive selection and knowledgeable staff.

“I’ve been coming to 101 Bottles before they even had a bar,” Smith said. “And now that they offer so many different beers on tap all the time, I started coming here even more.”

Contini said Wednesday is usually the busiest night of the week because they have special events to feature different beers. 101 Bottles recently featured Great Lakes Brewing Co., and plans to showcase beer from Hoppin’ Frog Brewery on April 25.

“Craft beer has a big following,” Contini said. “The city and community have done a really good job engulfing the craft beer market and craze. If they really like a beer, and you have it, they’ll come for it.”

Sessions said the clientele has been a very interesting mix of age groups. He said many college students are becoming just as savvy as older customers.

“It’s just been kind of a unique experience,” Sessions said. “Now with the bar, we get a better way to help out people and answer questions. We’re able to narrow down their tastes a little better to try and provide them a better service. So the bar has really helped us get to know our customers a little better. It’s proven to be quite useful for them and us.”