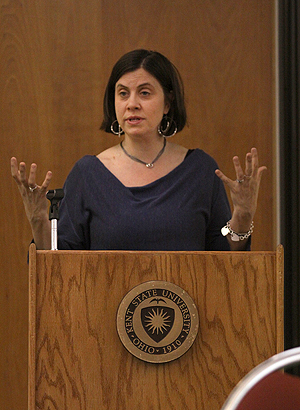 Kent State Jewish Studies had Alexandra Zapruder, the author of “Salvage Pages” speak at the Student Center on April 24. Zapruder talked about how she assembled stories for her book about children’s diaries from the Holocaust. Photo by Brian Smith.

Anne Frank may be the most famous diary from the Holocaust, but Alexandra Zapruder, author of the book “Salvaged Pages: Young Writers’ Diaries of the Holocaust” visited Kent State to share other diaries that give readers a better understanding of life during the Holocaust.

Zapruder spoke at the final Lunch and Learn series of the semester, presented by Kent State’s Jewish Studies Program in collaboration with Youngstown State University’s Judaic and Holocaust Studies department.

Zapruder was working with the Holocaust Museum in Washington D.C. in 1991 designing the exhibit for young visitors when she began researching the lives of teenagers in the Holocaust as a side project.

“I remember very vividly my reaction to these writings. They were so immediate and so direct and so poignant and so powerful and so well written that I was simply stunned by them,” Zapruder said. “I couldn’t stop reading them. It never even occurred to me that anyone but Anne Frank had written a diary in the Holocaust. It was simply not anywhere in my mind.”

Zapruder spent 10 years gathering diaries from teenagers in the Holocaust for the book. By the time “Salvaged Pages” came out, Zapruder said she had identified nearly 60 diaries by teenagers.

“Maybe in a book about the Holocaust in France, there would be a quote of a 13 year old who kept a diary in Paris,” Zapruder said. “Well where was that diary? Could I find it? Could I get a copy of it and have it translated and read it?”

The diaries in Zapruder’s book contain entries from children all over Europe. The wide variety of young writers range from ages 12 to 22 and span from devout Jews to a young boy who was converted to Catholicism but was still persecuted during the Nazi regime.

Zapruder read a few passages from her book with interspersed Q-and-A sessions in between. She also shared stories about her collection, such as trying to collect diaries from people who were sometimes reluctant to give them.

Hallie Rombach, junior fashion merchandising major, said she has gone to Lunch and Learn lectures before and she also received extra credit for going to the presentation.

“I thought it was really moving,” Rombach said. “All I’ve ever read was Anne Frank. I’m Jewish, and I’m very into the history of it.”

Zapruder also had a book signing at the end of the lecture.

“One of the things that I wanted was to broaden the story of Anne Frank for the public,” Zapruder said. “Anne Frank’s story is one story, but what are the other stories?”