Flashes’ Jackson to transfer from Kent State at end of semester 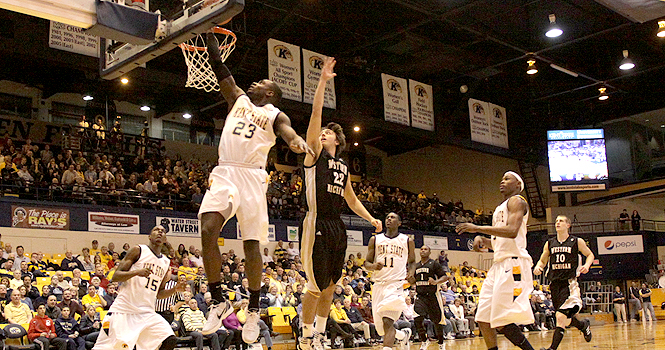 Kent State forward Patrick Jackson makes his way through the Western Michigan defense during the Feb. 4 game at the M.A.C. Center. The Flashes won the game 78-77 against the Broncos. Photo by Brian Smith.

Jackson, a 6-foot-6-inch forward from Brooklyn, N.Y., transferred to Kent State from Rutgers in the spring of 2010. Due to NCAA transfer rules, Jackson sat out the entire 2010-11 season as a member of the team. He played his first and only season at Kent State in 2011-12, averaging 2.8 points and 2.5 rebounds in 33 appearances.

“I didn’t want to transfer, to be honest, but I felt I wasn’t going to be able to play the role I’d like to,” Jackson said. “Because of the lack of size on this team, I’d be a down low player. In order for me to have a professional career, I wouldn’t be able to make it as a power forward or big man.”

His release from the program was a mutual agreement between Jackson and the coaching staff. Flashes’ head coach Rob Senderoff acknowledged Jackson’s aspirations.

“[Senderoff] understood where I was coming from because he knows the team’s demands and where they would need to put me at,” Jackson said.

“After meeting with Pat at the end of the year, we came to the conclusion that it is in his best interest to move on to a school where he can have a larger role,” Senderoff said in a statement released by the athletic department.  “… I appreciate the hard work and effort that Pat has given our program during his time here and wish him the best of luck in the future.”

Jackson is working toward graduating in the summer with a degree in Education Studies and will immediately be able to play wherever he chooses to transfer, which he has yet to determine.

“I’ll just talk to different schools and see where they envision me,” Jackson said.

Jackson joins forward Scooter Johnson as the second player to leave Kent State after the Flashes finished the 2011-12 season with a 21-12 record.