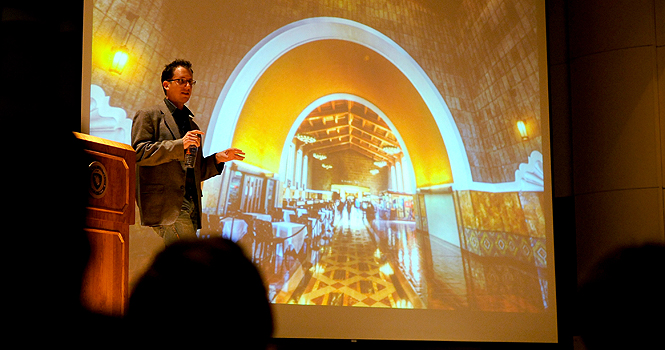 Lefton introduced the series by saying the university plans to bring the best of the best in each field to inspire the public.

“When it comes to the field of photography, the speaker tonight is really in a class by himself,” Lefton said. “Because it’s a class he, in part, created.”

After his introduction, Ratcliff started off his speech by talking about how much content is on the Internet and how people need to be vulnerable when posting photos or other information online, so they can remain true to themselves.

“Maybe you’re not willing to share this [passion] because you’re worried about old friends or old family … that will judge poorly for something that you’re into,” Ratcliff said. “Well, just be proud and be vulnerable and throw it out there. … Otherwise you’re kind of pretending all the time, aren’t you? You don’t really want to be pretending. It’s not really a full–all way of living.”

Ratcliff then spoke about working on a person’s online self. An online self, he said, is “awake,” always online and people can interact with it even if the physical person is asleep. As an example, he used his blog, Stuck in Customs, the No. 1 travel photography blog in the world.

Kayla Weaner, senior middle childhood education major, attended the event with her sister Julia, a high school junior who has an interest in photography. Kayla Weaner said she was intrigued by how Ratcliff spends time online working on his digital self.

“I find that an interesting concept because I am more reserved online,” Kayla Weaner said. “But he has completely embraced it.”

Throughout his speech, Ratcliff’s pictures appeared on a screen near him.

In regard to the photos, Julia said, “he takes a lot of time to go through details.”

Ratcliff also spoke about copyright of photos, music, anything posted online in relation to supply and demand and how once something is published on the Internet, it can be copied limitless times. There is a limitless supply of material to meet people’s demands, he said.

“The main question is if you create something and you put it out there, you want to make sure that other people don’t make money off your creation,” Ratcliff said.

John Fillian, of Cortland, Ohio, traveled 45 minutes to Kent State to attend the speech. He said it was interesting to hear Ratcliff’s viewpoint on how the Internet is affecting the world.

“And his ideas of letting people view it free, showing your artwork free to everybody … I never thought about that,” Fillian said. “I was thinking, you know, in the old days, you’d have a couple of photographs you’d show some friends or join a camera club and show a few people, but now you can show your work to the world.”

Ratcliff finished his speech by giving some advice to the audience about finding their passions and becoming specialized in different things to make the world better.

“The way that you all can make the world a better place is by trying a myriad of different things, making a ton of mistakes,” Ratcliff said. “And the more mistakes you make, the more successes you’ll actually have. And you’ll be well-prepared for whatever presents itself in your own future.”

After his speech, Ratcliff answered audience questions, such as how being blind in one eye affects his view on photography.

“Because I see the world in 2D, it’s so easy for me to compose something,” Ratcliff said. “I just walk up and take a picture. I just kind of know where to stand. I get there; I make it happen.”

Ratcliff said he looked prepared for his speech but really wasn’t.

“I have certain slides I like to talk to, and I just go through the motions to make sure that people understand what I’m talking about,” Ratcliff said.

Kayla Weaner said the speaker series brings talent to the area that students may not hear from.

“Even though information is out there on the Internet, even though you can learn about anybody, having it real and in person, as he was talking about, is a nice touch,” she said.